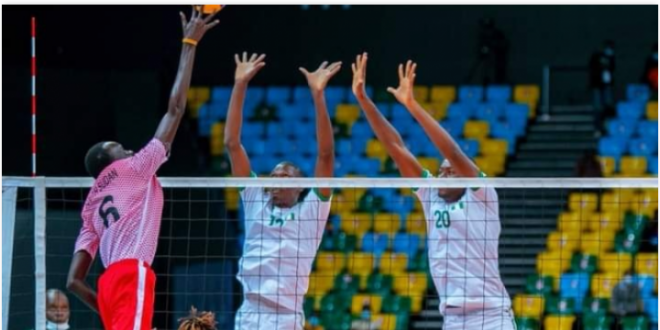 Head Coach of Nigeria men’s team, Usman Abdullah insists the match with the North Africans was a physical one but admits experience won the game for Nigeria.

Abdullah further disclosed that his target is to reach the quarterfinals and believes the victory over beating the Sudanese is the first step to it.

Having saw his side bowed to Tunisia earlier on Tuesday, the ex- International praised the character and commitment of his team.

“South Sudan lost 3-2 to Ethiopia on Tuesday and it was expected of them to become more physical against us. I am excited the boys used their experience to suppress the South Sudan boys,” he started.

“The team is not in Rwanda for jamboree, our minimum target is to be in this year’s quarterfinals and if possible secure the Semifinals ticket. For those who knows me, the word impossible is not in my dictionary.”

“After losing to Tunisia, I drew the attention of the boys to their bad blocks and lack of defending after an attack and I am happy the boys adhered to every instructions from the coaching crew.”

Abdullah s)id the next mission is to secure maximum points against Ethiopia on on Friday.

“Our mission is simple, beat Ethiopia and qualify for the Quarterfinals. We are not going to joke with an set against Ethiopia, the boys on Friday by 4pm time around,” he concluded.

Nigeria will face Ethiopia in their final match in Pool B on Friday by 4pm.