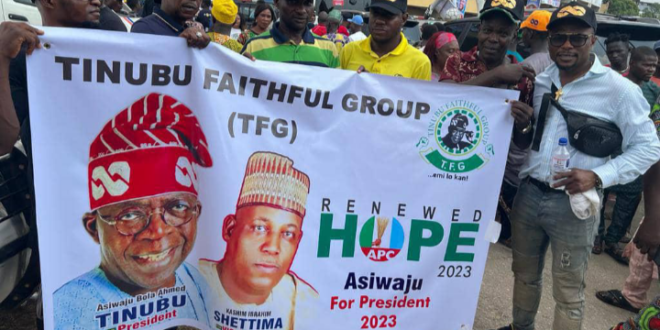 Political support groups faithful to Vice President Yemi Osinbajo have declared their support for the presidential candidate of the All Progressives Congress, APC, Asiwaju Bola Tinubu.

After the APC Presidential Primaries, we held several executive meetings and come to a progressive decision to support Tinubu, who is the flag bearer of our party with capacity and competence.

TFG was impressed when Asiwaju stated, “I have been to his (Osinbajo) house after the primary. I have seen him on the day of goodwill message to the retreat organised by the President. I’m a man, who forgives.”

Following the endorsement of Bola Ahmed Tinubu by The Faithful Group, The All Progressives Congress (APC) has issued a certificate of recognition to Tinubu Faithful Group (TFG).

The National Coordinator of the group, identified as Hon. Olusola Orelaja who is also the National President of Our Nation For Justice Initiative (ONAJI), said “this is a good development, as it would boost the morale of our faithful members and spur them to support the movement during the campaign for the actualisation of Bola Ahmed Tinubu becoming the next president of Nigeria come 2023.

Tinubu is a leader, visionary, possess character and a compassionate personality. Therefore, Faithful Groups in diaspora and different states in Nigeria are ready to support and vote in the strategist of our time.

I can authoritatively say, Bola Ahmed Tinubu has paid enough dues to attain the leadership of Nigerian President and it’s clear, non of the contestants can match his democratic credentials and record as a public serviceman in the last 23 years, i measure his success by deliverables, during his tenure as the Governor of Lagos State. “Orelaja said.

Tinubu stands out as one politician with the best resume, experience and exposure. This is considered necessary because Nigeria needs a competent and detribalized leader who is not a religious bigot to encourage peace, unity and prosperous nation.

In his words “He noted that the group consider the campaign of Asiwaju Bola Ahmed an obligation, adding that they would knock on every doors, speak to every Nigerians and travel across the length and breadth of the country to preach and win for Tinubu/Shettima.

He prayed that God should keep Tinubu in good health and grant him strength and the needed wisdom ahead of the 2023 presidential elections and beyond.

Tinubu Faithful Group – is a support  organisation of the presidential candidate of the All Progressives Congress (APC), Asiwaju Bola Tinubu