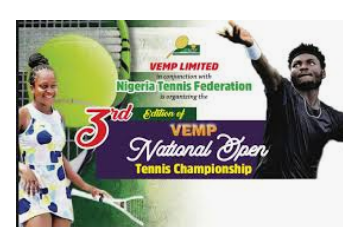 Over 224 athletes has enter into title chase in the 3rd edition of the VEMP National Open Tennis Championship.

The national open organized by VEMP Limited in conjunction with Nigeria Tennis Federation(NTF) which serve-off yesterday would climax Saturday, November 13, 2021 at the National Tennis Centre, Package B of the Moshood Abiola National Stadium in Abuja.

The tournaments which saw players across the country will see athletes battle for the ultimate prize in four categories namely Men’s Singles, men’s doubles, Women’s Singles, and Women’s doubles.

There will be three days of qualifiers for men which are in a round of 64 while that of women will be round of 32 with ITF bronze-badge referee, Saidu Musa as tournament director.

No fewer than 6 Outdoor Courts will be used for the Games as Slazenger has been selected as official ball of the tournament.

The president of Nigeria Tennis Federation (NTF) Ifedayo Akindoju commended the VEMP Limited for their great contributions towards the development of Tennis in the country adding that the tournament shall be guided by the rules established by the International Tennis Federation and the Code of Conduct of the NTF.

“We want to commend the efforts of VEMP Limited for their contribution to Tennis in the country, the athletes are full ready to give their best and as a federation we will ensure a successful tournament” he said.

Recall that the 2nd edition of the VEMP Open in 2019 saw both Sylvester Emmanuel and Oyinlomo Quadre emerged champions in the men’s singles and women’s singles respectively, as they are expected to defend titles at the start of the main tournament on Monday.