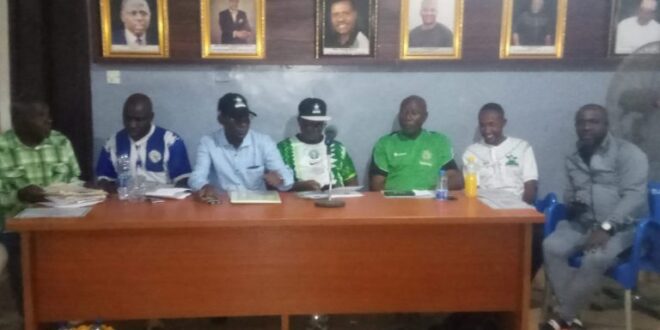 Abuja All Stars International has on Saturday, November 26, 2022, inaugurated a new set of executive members to steer its activities for the next two years.

Recalled that the elections into various positions were conducted by the Abuja All Stars International electoral committee where Ex- International Nasir Jibrin emerged as the new president of the club unopposed.

Antai Effiong is the new vice president while Danlami Alanana won the position of General Secretary.

Speaking with journalists after the election, newly elected President of the club Nasir Jibrin, who promised to run an all inclusive administration, thanked the electoral committee for conducting a peaceful, free and fair election and also the members for finding them worthy of the various positions.

“On behalf of the new exco members, I want to thank the house for finding us worthy to lead the club for the next two years and I want to promise you all that we will not let the club down.

“It’s All Stars Abuja, they felt am capable to pilot the affairs of the club for the next two years and that is the reason consensus was reached for me to run unopposed so am grateful to our members”.

Mr. Nasir Jibril, who believes that he is surrounded by experienced exco members that have the capacity to move the club to its next level, further stated that he will do all within his power to bring more togetherness to the club.

“Unity is Key in the club moving forward and I believe that we the new exco will do our best to unite the house. Also welfare of the club members will be taking seriously”.

The election that ushered in the new exco members and the inauguration took place at the Abuja All Stars Secretariat, Package B of the Moshood Abiola Stadium, Abuja.