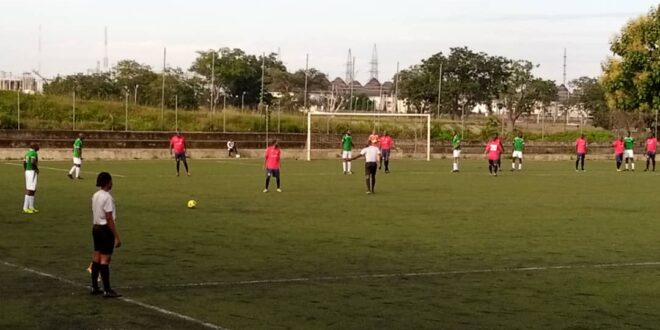 It was all glitz, glamour and soccer artistry in display at the second edition of the Abuja Veterans Invitation Tournament as defending champions, Abuja All Stars, defeated USF FC by a lone goal during the opening game of the day.

The match which was a repeat of the first edition opening game last year lived up to the billings as the two sides were brilliant and mesmerised soccer fans at the FIFA Goal Project Pitch package B oNational Stadium, Abuja. The Abuja All Stars scored the only goal in the first half and was able to defend the lead to pick the three maximum points at stake.

Speaking to journalist after the game, the technical adviser of Abuja All Stars, Coach Bassey Patrick, described the match as a tough one saying they came with determination to win because USF defeated them in the opening game of the first edition last year.

“It was a tough match for us because we played the opening game of the first edition with this same team (USF) and they defeated us. We know that they are a good team and we prepared very well for them.

“We came with the determination to win and we put everything in place and made sure we got the victory. We believe we will improve and play better in subsequent games and we want to take each game as it comes.

“We have seen the loopholes that we are going to work on. I strongly believe that I have the materials and the quality to retain the trophy. I want to call on Abuja residents to come and watch the games. These are ex-internationals who are still displaying great skills at this age. I want to invite young players to come and see skill in action,” Coach Patrick said.

Other matches of the day saw Nyanya All Stars beat hard-fighting Unity Veterans by 2 goals to nothing, Corporate Kickers 2 Metro City 0 while Likeminds and Alieta All Stars settled with 2 goal apiece.