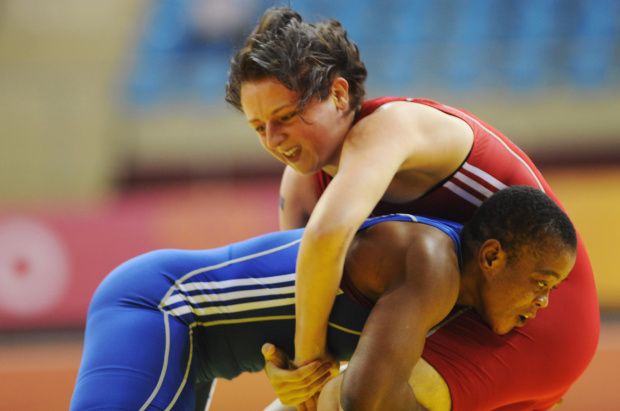 Senational Odunayo Adekuruoye of Nigeria has defeated Nina Menkenova of Russia in the final of her weight category 12-2 to win the gold medal at the Azerbaijan Golden Grand Prix.

Adekuruoye had defeated Tatyana Kit of Ukraine 10-0 to set up a semi-final clash with Abdildina Aiym of Kazakhstan 5-2.

Meanwhile, Amina Adeniyi of Nigeria defeated Tkach Ostapc of Ukraine 4-0 in her first fight. She eventually lost Sastin Mariana of Hungary 3-6 to lose out of the medal zone.

When the result hit our office, there was wild jubilation which spread out to neighbours and when others heard, the celebration spread like wild fire and in minutes, some fans had Odunayo’s Commonwealth Games celebration with the Nigerian flag wrapped around her waist produced from no where by the fans who were jubilating round the environment and spreading the news.

Amas Daniel could not fight because by the time some funding came the way of the team to fly to Baku, the capital of Azerbaijan, she and the only male wrestler were late for the weight control and could not test all they had practiced ahead of this championship.

Team captain, Blessing Oborududu, had to also miss out of the championship due to some mix up in with Immigration. Had the Nigerian Sports Ministry taken it in stride to have made funds available in good time, these three wrestlers’ chances of plucking medals would have been higher and brighter.

Of five representations, only two could fight and one got the gold medal.

Nigeria's most authoritative online newspaper with a deep reach for the Defence of the truth at all times.
Previous Celestial Church holds harvest Sunday in Abuja
Next Tiers of govt gets lower revenue for November