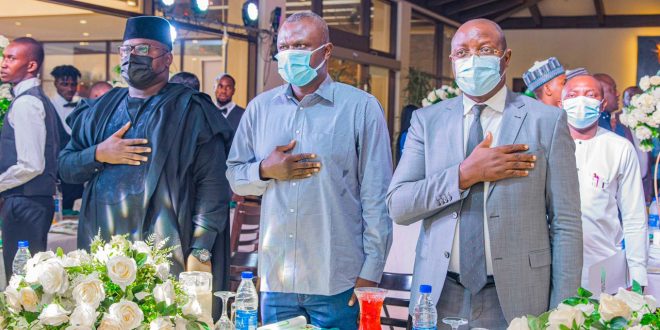 Technical Director of the Athletic Federation of Nigeria AFN, Samuel Onikeku has poured encomiums on I Choose Life Foundation for hosting and rewarding the young athletes that represented the country at U20 World Athletics Championship in Kenya.

The athletes were treated to a dinner and rewarded with a sum N3.4m by the Foundation in the presence of the Minister for Youth and Sports Development, Mr. Sunday Dare.

He said if performances like this are followed by such honours, it will boost the morale of the athletes.

Onikeku explained further that the AFN never had any issue with the athletes but that they do not usually get any support after such performance.

“Such support will remove the burden of taking care of their families from them and enhance their performance,” he said.

The AFN board member added that the Sports Minister’s Adopt an Athlete program will no doubt improve the performances of the athletes in future international meets.

He explained that the board does not intend to rush the athletes by immediately taking them to the Commonwealth Games and World championship as some of them are still eligible for the next junior world championship.

Although he said they would encourage 3 or 4 of them for big tournaments but it will be done gradually so as avoid injuries.

“We are only waiting for the Youth Games in Ilorin after that we shall come out with our programmes for both the senior and junior athletes as we prepare for the world lndoor Games next year March.

Previous Take Back Your Association From Imposters, NUJ President Charges SWAN
Next Plateau Ready To Take On The Rest of The Nation In The 6th Edition Of The National Youth Games