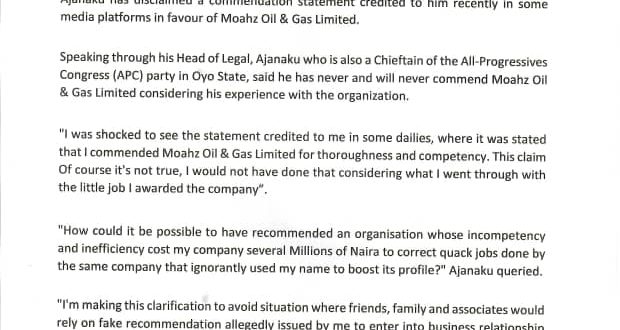 Editor1 July 14, 2021 Business, News Comments Off on Ajanaku Disclaims A Published Statement Credited To Him On Commendation Of Moahz Oil & Gas 183 Views

The Asiwaju Odo O’odua (President of O’odua Youths Worldwide), Asiwaju Rotimi Ajanaku has disclaimed a commendation statement credited to him recently in some media platforms in favour of Moahz Oil and Gas Limited.

Speaking through his lawyer xxxxx, Ajanaku who is also a Chieftain of the All Progressives Congress (APC) party in Oyo State said he has never and will never commend Moahz Oil and Gas Limited considering his experience with the organisation.

“I was shocked to see the statement credited to me in some dailies, where it was said that I commended Moahz Oil and Gas for thoroughness and competency. Of course it’s not true, I would not have done that considering what I went through with the little job I awarded the company.

“How could it be possible to have recommended an organisation whose incompetency and inefficiency cost my company several millions of naira to correct quack job done by the same company they ignorantly used my name to boost its profile?” Ajanaku queried.

“I’m making this clarification to avoid situation where friends, family and associates would rely on fake recommendation allegedly issued by me to enter into business relationship with Moahz Oil and Gas Limited,” He warned.‎