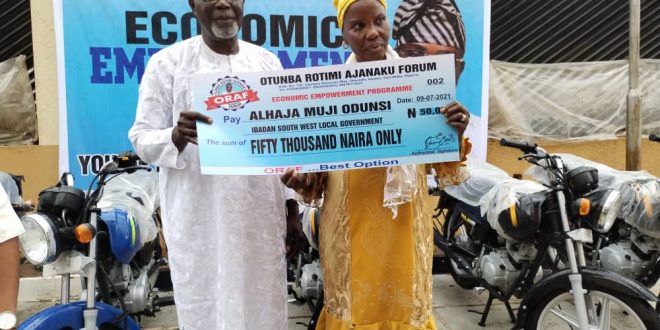 A Chieftain of the All Progressives Congress (APC) in Oyo State, Asiwaju Rotimi Ajanaku has empowered some members of the APC party from Ibadan Southwest and Northwest Federal Constituency with substantial amount of money to support their trades, while motorcycles were also given to some members for ease movement.

In his welcome address, the campaign DG of Rotimi Ajanaku Campaign Organization, Hon. Alade Suleiman Abiola who spoke on behalf of Asiwaju Ajanaku during an Economic Empowerment Programme, held at Dino Hotel, Oke Ado area of Ibadan, on Saturday, assured all members of the party that the exercise is a continuous one and no one would be left out.

“This is not the first Empowerment Programme or support to humanity to be organized by Asiwaju Ajanaku. Our organization has offered a lot of assistances to the people of Oyo State, even this year. We have over 85 students in various schools, both local and international benefitting from our full scholarship programme. Now it’s our party members’ turn, that’s the reason behind this programme. It’s a continuous programme, so for those who missed out today, next one is at the door,” he assured. 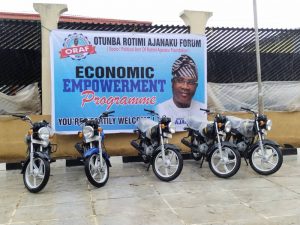 “Rotimi is yet to be federal law maker, but in his constituency, Ibadan Southwest and Northwest Federal Constituency, his positive impacts in the lives of both politicians and electorates is outstanding. His attitude and humility can not be matched by any politician, especially those who see themselves in the class of well-to-do Nigerians.

“I’m convinced that the labour of Ajanaku in terms of his continuous support to the party, financial commitment even after election to ensure our party survive, especially now that we are not in power would not end in futility,” Prince Adekanye stated.

Also one of the elders from Ajanaku’s constituency, Alhaji Lukman Bolaji, who said his presence was necessitated by Ajanaku’s past contributions to humanity, particularly people living in his constituency, commended Asiwaju Ajanaku and asked APC leaders to rally him needed support to emerge party flag bearer and subsequently win the forthcoming election into the national assembly.

He made mentioned of how he led Ajanaku Foundation to some selected Mosques in Ibadan to distribute bags of rice to Muslim faithful during the last Ramadan Fast.

“Yet to be voted to the national assembly, but his commitment and contributions to APC party and its members, coupled with his humility, is highly intimidating. I want to assure both the leaders and members of APC in Oyo State that if they could be kind enough to reciprocate Ajanaku’s gesture by rallying him support to win 2023 election into national assembly, they would never regret it. Ajanaku as a federal law maker will transform many lives, will accord more regards to leader and make great contributions to economic advancement of our pacesetter state,” Alhaji Bolaji assured.

In her farewell speech, APC Women leader in the state, Mrs. Mabel William said, “Rotimi Ajanaku is an exceptional politician, born naturally with milk of human kindness. He has been denied ticket three times by the part, yet his financial and material support to the party, both at constituency and state levels remain a great challenge to others, especially those who have benefited from the party.

“For instance, the electricity generating plant he donated to the state secretariat is still in use till date. The only way we can reciprocate his gesture and that of others like him is to exploit opportunity available to us now in the ongoing voters registration to mobilize and encourage our people that have not registered to participate in the exercise,” Mrs. William appealed.

Speaking with the journalist after the programme on behalf of other beneficiaries, Alhaja Mujidat Odunsi from the Southwest said, “while other politicians are busy stocking money for 2023 election, when they are sure of spending it to buy vote, Ajanaku is busy solving our immediate problem to save us from untimely death. We pray God to reward him and grant all his heart desires.”

Previous Minifootball AFCON 2021: “Be Patient With Us” – Coach Urges Nigerians
Next Olajide To Thrill Guests At Ogun Ajobo Festival 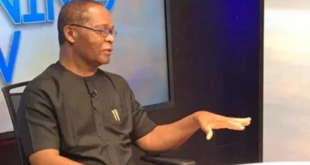