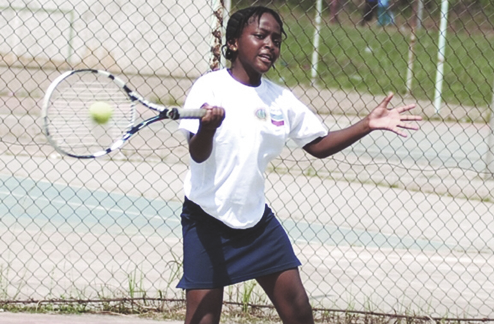 After three days of training, Oyinlomo Quadri and three others have earned their places in the Team Nigeria contingent that will be battling for honours at the forthcoming ITF/CAT Africa Junior Championship West and Central Africa Qualifiers billed for Lome, Togo from 10th-21st January.

Quadri, the best Nigerian player in junior tennis in 2016, is joined by the trio of Michael Osewa, Marylove Edward and David Dariwaye of the Port Harcourt-based Kodian Academy.

Nigeria’s junior tennis coach Mohammed Ubale said the four players listed have distinguished themselves so far at the week-long camping. The selection of the quartet at the camping being funded by NTF 1st vice-president Yemi Owoseni, will now see 20 others will vie for the remaining nine slots.

He said, “We have had two training sessions for the third straight day and, so far, the performances of Oyinlomo Quadri, David Dariwaye, Marylove Edward and Michael Osewa have earned them their places in the team which means the other 20 players are battling for nine remaining slots.”

Ubale, who is being assisted by Abel Ubiebi of Aces Tennis, stated that training has been smooth and the players are in high spirit and are already looking forward to the championship.

“We are aware other countries are eager to stop us from dominating the tournament as we have done in the last four years but we are equally motivated to do better this time around to justify the effort we have put into junior tennis in the past few years.”

Nigeria's most authoritative online newspaper with a deep reach for the Defence of the truth at all times.
Previous Racism: ‘We don’t want Nigerians in our country’ – South Africans
Next Kanu, Adamu,Chukwu storm Ilorin for Olarinoye’s retirement