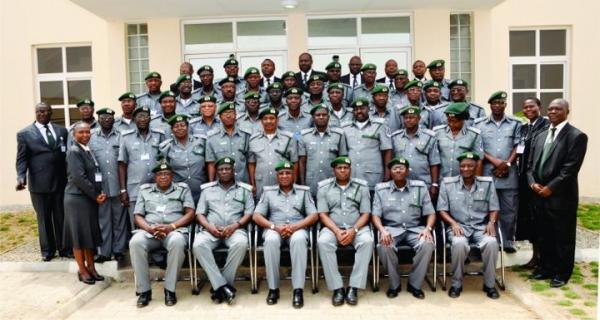 Justice AbdulAziz Anka of the Federal High Court, Ikoyi Lagos has fixed 12th January, 2017 for accelerated hearing, on the N500 million suit filed by the Nigeria Union of Journalists (NUJ) against the Nigeria Customs Service over the brutal physical assault on Badagry-based journalist, Yomi Olomofe.

Mr Olomofe was severely brutalised in the premises of the Seme Area Command of the Nigerian Customs service on Thursday 25th June, 2015.

In a ruling on an application to re-list the fundamental human rights suit filed against the Comptroller General of the Nigerian Customs, Comptroller Garba M. Ndalati, Deputy Comptroller Emmanuel Nkemdirim, Assistant Comptroller Ibrahim Nuru Turaki and leaders of a notorious border smuggling cabal allegedly led by one Suleimon Momoh, Sam Madubuike and two others by the NUJ, Justice Anka directed that ‘the suit must be given accelerated hearing from the next adjourned date on 12th January, 2017.

The judge further ruled that the hearing will commence on the said date on the condition that all costs awarded by the court be defrayed before the said date.

It will be recalled that following the brutal attempt on the life of Olomofe in full public glare by members of the Seme Border smuggling cabal led by Suleimon Momoh (aka Basket) and Sam Madubuike, the leadership of the NUJ in a January 2016 press briefing addressed by the national president of the union Mr Waheed Odusile had warned that: ‘the NUJ will no longer take lightly, any act of lawless impunity against any of its members across the country.

He said: “we will, in this particular instance of this criminal attempt on the life of Olomofe by people that have been identified to be law enforcement agents, prosecute this criminal infringement to a logical conclusion to serve as a deterrent to others who are in the habit of taking laws into their own hands. We will not allow this case to be swept under the carpet”.
The union’s lawyers have, in this regard therefore, been directed to institute stringent legal processes against Olomofe’s assailants and their state-actor sponsors.

A N500 million exemplary damages suit for the infringement on Olomofe’s fundamental right to life, the freedom of expression and the press was subsequently filed against the Nigerian Customs and Olomofe’s identified assailants by the union’s lawyers: Barrister Jiti Ogunye and Co, in February 2016.

In a curious twist of events, lawyers to customs and the Seme smuggling gang mischievously misled the court into striking out the suit on the palpable lies that the applicants were not in court at a hearing of the application on 16th June, 2016, whereas, as a result of the very small courtroom being filled to capacity, NUJ’s lawyers and Olomofe were forced to wait at the court’s balcony for some cases to be disposed of to allow for space in the courtroom.

Nigeria's most authoritative online newspaper with a deep reach for the Defence of the truth at all times.
Previous CAF seat: Pinnick concludes plans with Ghana FA boss
Next AWCON: First gets pain and dishonour while second gets Presidential honour