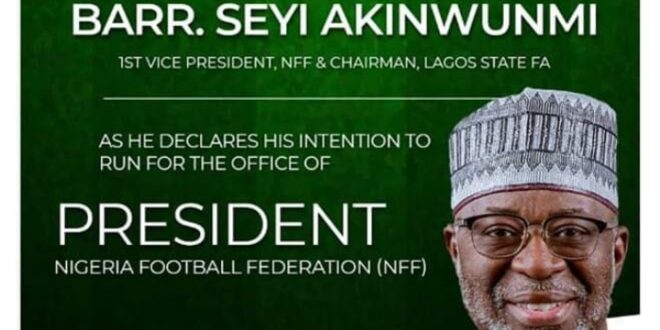 The Lagos FA chairman announced his desire to go for the top job, in a statement said he would formally declare to run for the position at Transcorp Hilton Hotel in Abuja on Tuesday, 30th August 2022.

He becomes the third person to officially declare to seek the presidential ticket of the NFF former NFF General Secretary, Musa Amadu has on Tuesday become the first to officially declare his intension to replace the outgoing NFF President, Amaju Pinnick, while the Chairman of Chairmen went to his state to seek the support of his people in Zamfara to declare his intentions to run as well during the week.

With the  sale of the expression of interest and nomination forms which will commence on Monday and the Presidential form is pegged at Five hundred thousand naira (N500,000)

While the date for the elective congress fixed for September 30 bearing any hitches from any quarters.