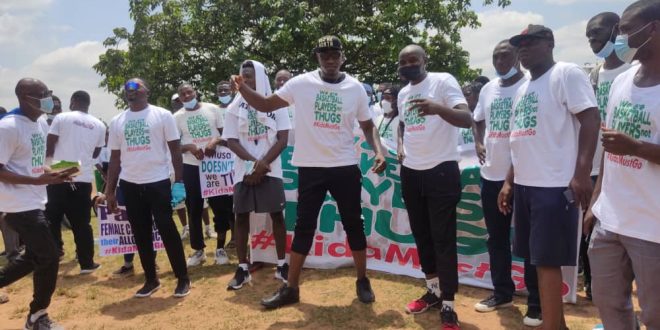 The players who stormed the office of the sports minister on Tuesday to register their displeasure,frowned at the posture of the Games Master in handling the leadership impasse rocking the federation.

Speaking to Journalists,a former NBA Player and Board Member under the Engr.Musa Kida lead board,Mr.Ejike Ugboaja urged the Sports Minister to be bold and address the issue without sentiment.

“The two elections were concluded two weeks ago, and we don’t know the stand of the minister, I  served under the Musa Kida’s board and I have played the game for more than twelve years,we have never experience this type of problem before, except the Minister has been compromised.

In his reaction,the present Players Representative in the board of the NBBF, Mr. Stanely Gumut said that basketball players home and abroad have thrown their weight behind Mr. Igoche Mark, insisting that the players have vowed not to repeat the mistake made four years ago.

The truth of the matter is that we the players have thrown our weight behind Mr.Igoche Mark. Unfortunately,the ministry is not saying anything about it.

We the players are the pioneers of this game and we don’t want to play free basketball anymore, the minister is suppose to come out and talk to us as a father,but the man has been shying away from talking to us and his action becoming worrisome to us.”Gumut stated.

Nigerian Basketball Players have vowed to resist every attempt to impose Engr.Musa Kida as the NBBF President.

They described the previous NBBF board under Engr.Kida has a sham and a global disgrace to basketball administration.