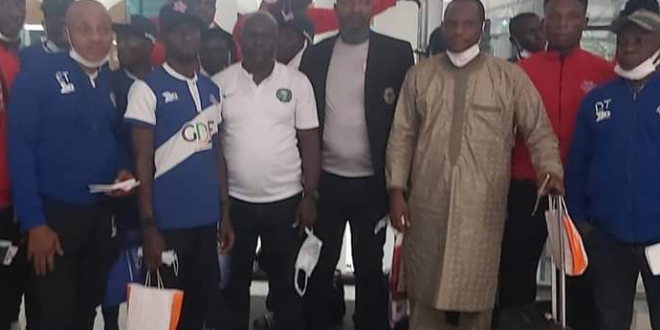 Bayelsa Can Make It In Tunisia.. Kwande

Editor1 October 23, 2021 Sports Comments Off on Bayelsa Can Make It In Tunisia.. Kwande 142 Views

Hon Suleiman Yahaya-Kwande NFF  executive board member and leader of delegation for Bayelsa United return leg in Tunisia,  is optimistic the team spirit is good and hope the player will compliment the effort of the government in today game.

According to him ” the Spirit of the players are high, the government has given them five star treatment in everything with Airline, hotel and transportation and I really appreciate the effort of the government and they have played their part so I expect the. Players to reciprocate the gesture of the government by giving us the result on Saturday so they have all the support to give us victory he said.
The NFF finance committee board member, however challenged the players to give their best and ensure the team moves to the next round saying the Nigeria spirit in them and also the support of the Bayelsa state government led by Senator Douye Diri should be part of the motivations to excel in Tunisia. He said.
Bayelsa United take a slim lead to Tunisia and the Nigeria underdog will be playing against 17 times African Club champions winner, 3 times CAF Confederation winners will play Nigeria FA Cup champions  on Saturday by 5 pm in Sfax.
Bayelsa United defeated Club Sfaxien at the Samson Siasia stadium by a lone goal in Yenegoa a week ago and they kook towards a favorable result to make it to the group.
Share