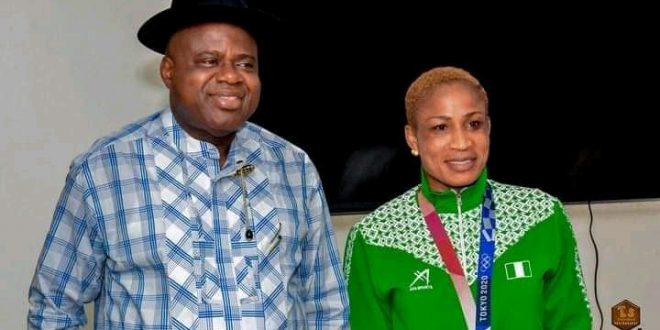 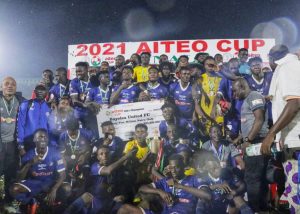 According to the Governor, each Coach of both clubs will receive 1.3 million Naira while chairmen of the clubs will be rewarded with 1.5 Million Naira each as board members of the clubs will go home with one million Naira.
Olympic silver medalist, Blessing Oborududu got four Million Naira for making Nigeria proud in Japan.
The governor noted that as a former commissioner for Youth and Sports Development he was elated by the feat achieved by both sides and the wrestler, describing it as unprecedented.
He commended the players and wrestler for their commitment and discipline throughout the tournament, pointing out that the success was just the beginning of greatness in their career. 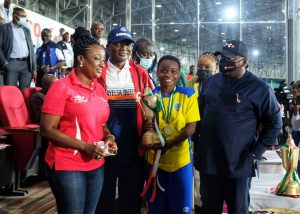 Senator Diri while advising players not to be carried away by the victory, said it was time for Bayelsa players to play in the various National teams in the country.
He encourage fans to support the local league and teams rather than paying attention to foreign leagues, stating that the only way they could get global recognition was continuous attention.
Earlier, commissioner for Youth and Sports Development, Mr Daniel Igali thanked the Governor and the deputy governor for the support given to sports in the state, noting that the success was as a result of the cordial working relationship the ministry has enjoyed with the government. 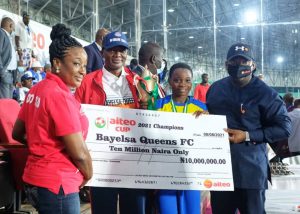 Mr. Igali appealed to the government for the immediate revamping of the Samson Siasia Stadium before the commencement of the CAF Confederation Cup, adding that it would not be befitting for the team to prosecute their home matches outside Bayelsa.
In an interview, chairman of Bayelsa United, Mr Ebiki Timitimi appreciated the governor for the gesture, stressing that it would spur the players ahead the CAF confederation Cup.
The pioneer captain of Bayelsa United said he was optimistic of going beyond the preliminary round of Africa’s second tier club competition.
Share