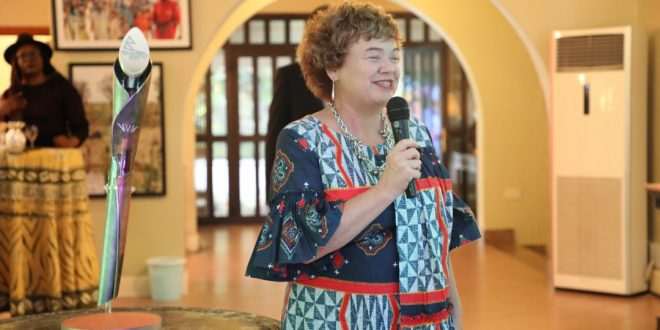 Catrion Laing who received the Baton at the British high commission house in Abuja over the weekend said she is delighted the Barton came first to Nigeria among the other African nations.

“The Queen baton relay is the kickoff of the Commonwealth games which will take place in Birmingham in 2022 the button left Birmingham on the 7th of October 2021 and has now arrived here in Nigeria which is the third country to receive the baton. It will take 204 days in total for the button to return back to Birmingham and it will get to 72 nation of the common words in the Spirit of friendship and solidarity. She said.

The button is to go through all 18 countries of the Commonwealth state and according to Cartrion Laing, Nigeria is the best and that is why it first arrived here.

“The Commonwealth is about humility, quality and diversity. So I think we have got two specific things about this games and we want to demonstrate that, The first thing is diversity and inclusion.

Having a separate disability game, para games as we I’ve done with the Olympics, is going to be completely different

For example if an athlete is on the wheelchair playing badminton, the medal will count exactly as that of others.

This Commonwealth, there’s going to be more games for women than men. for the woman category we have 136 medal and 134 medal for the men because we have included for the first time the women cricket so that is an example that the Commonwealth is really a diversity and humanity” she concluded.

Taking place from 28 July to 8 August, Birmingham 2022 is a once-in-a-lifetime opportunity to showcase the West Midlands on a global stage.