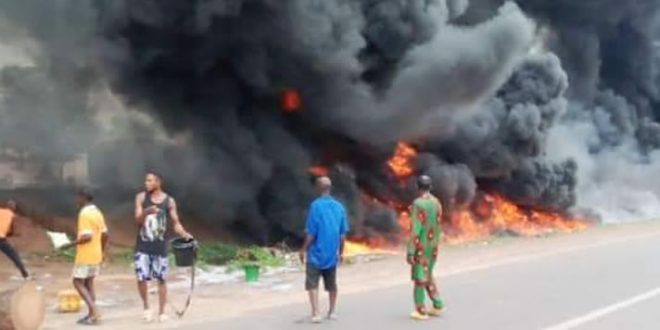 Bomb explosion has rocked a beer parlour joint in Kabba in Kogi West Senatorial district, making it the second time in less than one month.

The explosion occured on Sunday night at about 9

15 pm at the beer parlour directly opposite the police station.
The last explosion which occurred on May 11 2022 at a beer parlour around Lewu junction, Kabba town was shrouded in controversies as to whether it’s a bomb blast or gas explosion. The police in Kogi hasn’t release an investigative report on that till today.

Lives were lost and several others sustained injuries in the explosion at Lewu junction two weeks ago, but there was no human casualty in Sunday’s explosion.

Reacting to the incident, Kogi State Police Command in a statement by its
Public Relations Officer, SP William Aya confirmed the the explosion to journalists in Lokoja.

He explained that the explosion happened at one Omofemi Bar at Okepadi Quarters, Kabba, around 9:15pm on Sunday

As it is now, there is no casualty, but only chairs and tables and the building is affected by the yet to be determined nature of explosion.

“Already the Commissioner of Police, Mr Edward Egbuka, has directed our DC Investigations and the Bomb to ascertain the very nature of the explosion.

“The police is on top of the situation as our officers and men drafted to the area have cordoned the place until investigation reveals the real cause of the explosion.

It’s very unfortunate that criminal elements are out to disrupt the prevailing peace we are enjoying in Kogi.

“We shall not rest untill we bring to book such elements and let them see the need for maintenance of peace in our society,” he warned. Aya called on the people of Okepadi and Kabba to be calm and go about their normal duties without any fear as the police were on top of the situation.