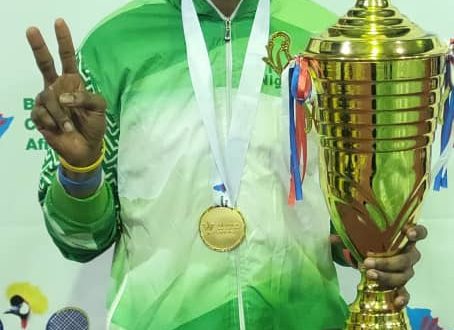 Nigeria’s Anuoluwapo Juwon Opeyori secured unexpected title on Sunday at the All Africa Individual Badminton Championships in Kampala, Uganda.
It is Nigeria’s first major win since the crisis in the administration of badminton ensued late last year. Opeyori was Nigeria’s sole entry as his doubles’ partner; Godwin Olofua failed to show up having travelled unexpectedly to Qatar. Due to lack of funding,
Nigeria was to present the three-man team that went for the Olympics comprising of Opeyori and Godwin Olofua in both the singles and doubles men’s event while Dorcas Adesokan had to be excused on account of preparation for her wedding.
That left only Opeyori as the sole competitor and was at the brink of not attending owing to the funding challenge. There is no executive board of the Badminton federation in the country at the moment and the leadership of a caretaker committee had to get Opeyori a flight ticket to attend the championship. 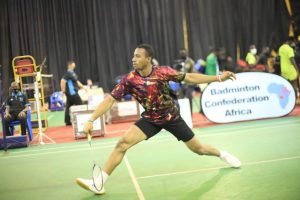 Not featuring in competitions had already taken its toll on the ranking of Nigerian players. Opeyori had to attend alone without any coach or support staff.
It was a gamble that paid off. He avenged his loss in the 2020 final with a thrilling 21-14, 23-21 win over Brian Kasirye of Uganda.
It his second individual gold medal at the event after taking the 2019 title following a win against countryman Godwin Olofua in that final.
Opeyori had beaten 2017 champion Adel Hamek of Algeria in convincing fashion with a 21-18, 21-18 semi-final triumph in the men’s singles.
On his path to the semi final he beat home boy, Israel Wanagalya of Uganda 18-21, 21-10 and 21-11 to get a 2-1 win having come back from a set down.

Nigeria's most authoritative online newspaper with a deep reach for the Defence of the truth at all times.
Previous Basketball Players Challenge Sunday Dare To Speak Up Over NBBF Leadership Crisis
Next 2023 Presidency: Group Wants Jonathan To Return To Power Under APC