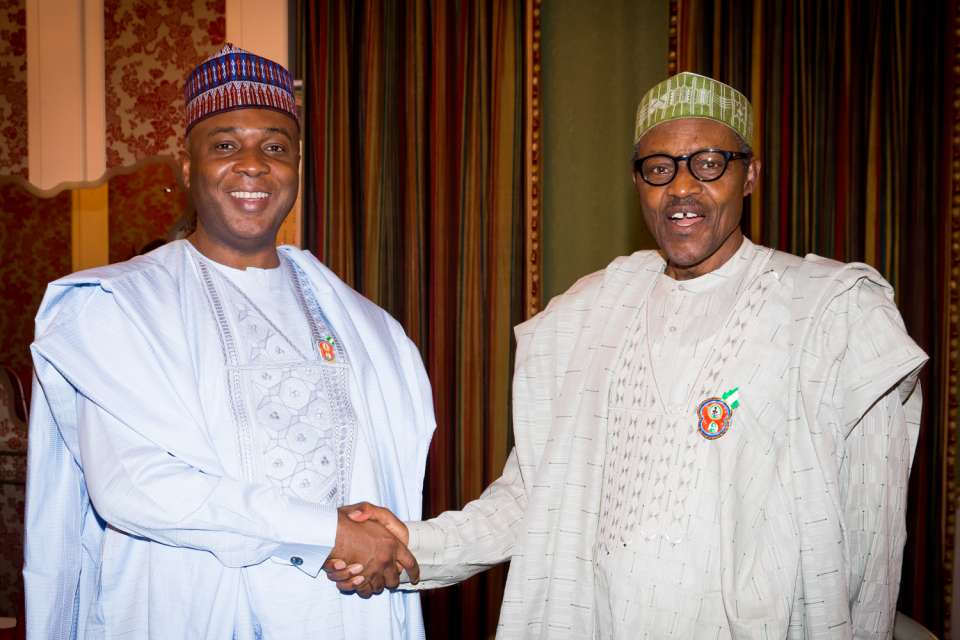 *It is not complete

President Mahammadu Buhari’s amended version of the Medium Term Expenditure Framework (MTEF) and Fiscal Strategy Paper (FSP) sent to the national assembly on wednesday narrowly escaped being rejected again as the Senators took turns in criticising the documents and insisting it should include the correct figures showing the true state of the economy.

According to the Senators the budget plans which includes spending a record of N6.86 trillion, oil production of 2.2 million barrels per day as well as currency exchange rate of N290 to the US dollar contained in the document is fraudulent, insincere, non-transparent and based on unrealistic assumptions.

Majority leader, Senator Ali Ndume, who described the first version of the MTEF/FSP as empty said MTEF/FSP should articulate government revenue and spending plan as well as it’s fiscal policy objectives over a period.

Meanwhile, President of the Senate, Dr. Bukola Saraki, in his contribution said he supports everything his colleagues said but insisted that since the Executive has failed to prepare the MTEF/FSP to meet the standard required, it is the responsibility of the legislatures to enhance it’s quality.

We have our committee on Appropriation and Finance that not just take anything from the Executive sing and return it verbatim.” If it means we have to look at it again, turn it around and do what is right then it becomes the responsibility of the House to do that”, Saraki said.

In conclusion, Minority leader, Senator Godswill Akpabio (Akwa Ibom North west) seconding the motion for the transfer to the committee said the President has hinted of his plans to present the 2017 Appropriation Bill to the National Assembly on the 1st of December, 2016.

In a related development, BudgIT, a civic start up that liberates budgets and public data from an inactive state into a more engaging format mostly through infographics and interactive application with the aim of improving civic discussion and institutional reform, has said that the 2017-2019 Medium Term Expenditure Framework (MTEF), presented to the National Assembly by the President Muhammadu Buhari-led Federal Government is incomplete.

BudgIT said the MTEF does not include Federation targets (Federal, States and Local Governments), as well as clear classification of revenue lines.

In a statement on Thursday, by its Programme Manager, Abiola Afolabi, BudgIT said: “The 2017-2019 Medium Term Expenditure Framework, (MTEF) is incomplete, as it does not include Federation targets (Federal, States and Local Governments) as well as clear classification of revenue lines. “It is important to note that Medium Term Expenditure Framework does not only apply to the Federal Government but also state governments also draw their projections from previous documents. “The current MTEF document does not include a detailed 2016 budget performance report.

It is important to know the Budget Office of the Federation has not released any budget implementation report for 2016. “In terms of comprehensiveness of the MTEF documents as previously seen, the 2017-2019 projection is a setback. “The projections show that the Federal Government continues to expand its debt and this will keep increasing the debt service costs in medium-term.

“These costs could be up to 40% of the actual revenues in 2017, an alarming index despite a low debt-to-GDP ratio.” The statement added that “A recent downgrade of Nigeria’s credit ratings further down in the junk category was because of the risky expansion of debt without attendant massive revenue growth.

“The MTEF document shows that Nigeria might borrow in order to afford her recurrent expenditure. This is a worrisome trend, as it shows oil revenue and tax receipts are no longer enough to pay salaries, run overheads and service debts. “Nigeria has a serious revenue challenge and the huge hope on the Treasury Single Accounts is currently being dimmed despite the bogus projections for Independent Revenues in the medium-term. “The targets for revenues are overly optimistic and without serious overhaul of the tax system and waiver structure, we don’t foresee more than a 60% performance. “The capital expenditure growth is encouraging but careful interest must be on the line items to ensure that they provide a balanced social and economic support for the economy currently in recession.

“We have seen cases where various items of questionable status in terms of benefit to the public are classified as capital projects. “Aggressive recovery of loot, rise in oil prices coupled with stable oil production and astronomical spike in tax revenues are key factors to make these revenue projections realistic. “We hope that the presentation of the 2017 Budget by President Muhammadu Buhari on 1st December, 2016 will be detailed and puts into full consideration of the current downturn in the economy.”

Nigeria's most authoritative online newspaper with a deep reach for the Defence of the truth at all times.
Previous Civil Defence back in the DStv League
Next Akeredolu is Ondo governor-elect