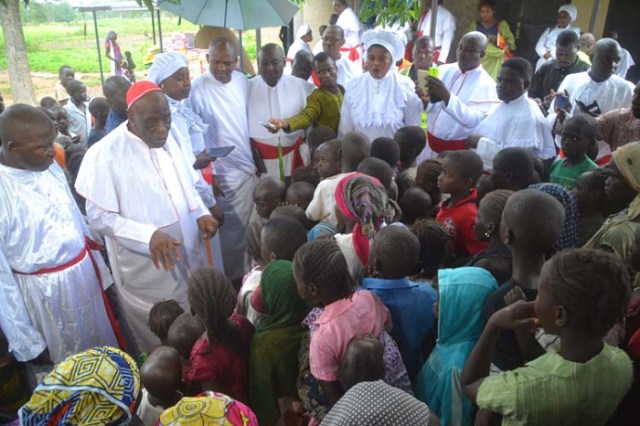 Chairman and Spiritual Father of Cherubim and Seraphim Movement Church Worldwide, His Grace Most Reverend Prophet Samuel Abidoye has called on Nigerian leaders to sit up and be proactive in addressing the various challenges affecting the nation.

Prophet Abidoye gave the charge in Ilorin in an interview with newsmen ‎on Sunday where he said the call become necessary to address the economic crisis and the hike in prices of goods and services.

Prophet Abidoye ‎who was in Ilorin for the tenth year anniversary of the Chairman, Ilorin District of C & S Movement Church, Special Apostle Joseph Daniel urged the various governments to diversify the nation’s economy by embarking on aggressive agriculture development.

The Spiritual Father implored the Federal and the State governments to give soft loan to farmers and provide necessary incentives ‎to boost farming activities in the country.

He stated that the country is blessed with vital ‎land advising the people to embrace farming as one of the ways to addressing the rising cost of food items.

Prophet Abidoye who decried the high rate of unemployment and poverty in the land charged the government to positively empower the youth to ‎contribute their quota to the development of the nation.

‎The Spiritual Father also called on the Federal Government to be firm in its fight against corruption and not to be selective to stem the tide in the Nation.

He equally called for the judicious use of fund recovered from former corrupt leaders‎.

Prophet Abidoye explained that election should not be a do or die affair warning the various political parties not to turn the nation to war zone as a result of election.

The Spiritual Father condemned the killing of people and security personnel d‎uring election period advising Nigerians to learn from other civilised nations in the conduct of election.

He described the Chairman of Ilorin District of the Church, Special Apostle Daniel, as a man that has contributed immensely to the growth and development of the church.

In his sermon at the service, Special Apostle ‎Prophet Segun Korode who focused on “thanksgiving” commended the sterling leadership qualities of Special Apostle Daniel noting that the Ilorin District of the church had witnessed tremendous growth and development within his short time on the leadership saddle.

Prophet Korode described Special Apostle Daniel as a man of God that is prudent in spending and how he accommodates youth in various church programmes and activities.

Nigeria's most authoritative online newspaper with a deep reach for the Defence of the truth at all times.
Previous Redeem Federations Cup promise stakeholders beg Ambode
Next Magu, DSS, Saraki, Buhari and the intrigues of a corrupt cabal