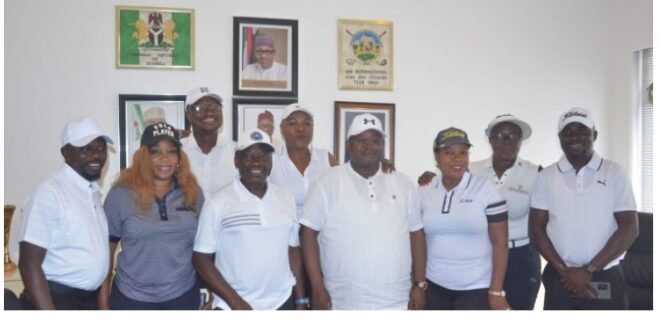 Over 500 golfers across the country would tee off in the Captain Inaugural/Harmony Tournament scheduled for Friday and Saturday at the IBB International Golf & Country Club, Abuja.

Chairman of the organising committee, Andrew Yakubu during media parley on Tuesday in Abuja said aside from the members of the club that captains and vice captains of the Golf Clubs across the country would participate in the 18 hole tournament.

Yakubu who prides the IBB International Golf & Country Club as one of the best in the African continent, said a consortium of corporate organisations have been approached by the Committee for support.

According to him, the higher handicap players, men and ladies would play on Friday while the lower handicap players would storm the course Saturday, saying that every activity attracts a range of prizes for those who perform well.

He explained that the Captain Inaugural tournament is a tradition and a regular feature in the club, and the Captain this time, decided to include ‘Harmony’ as golfers from other clubs across the country would be involved.

The chairman organising committee also said that some the corporate organisations reached for contribution have been responding positively to the success of the tournament. “There is full of expectations and the Captain has no option but to perform, and we all will give him the weight he deserves, and we will do the best we can to support him to succeed”.

A communication giant, Airtel is one of the corporate organisations already indicating interest to assist in the Captain Inaugural/ Harmony Tournament.