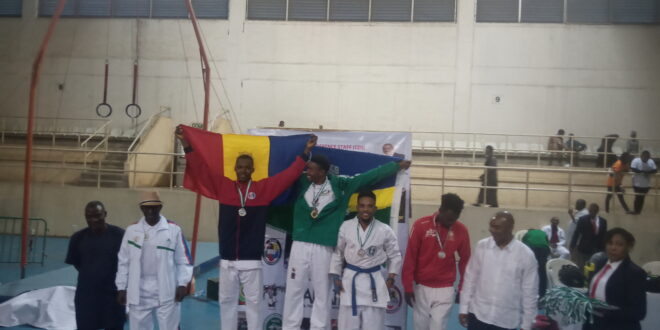 President of Karate Federation of Nigeria KFN, Silas Agara has said the sport will soon rank among the elites sports in the country if it continues to enjoy the kind of support it enjoyed from the Chief of Defense Staff CDS, Lieutenant General Lucky Irabor.

Agara the former Deputy Governor of Nasarawa State praised the Irabor for the sponsorship of the 1st CDS Karate Championship which ended at the weekend at Gymnastics Hall of the MKO Stadium, Abuja.

He said he was happy that given the level of presentation and honour by CDS, more youths will be encouraged to embrace the sport after the championship.

“We have a long way to go, but certainly we on the right path. It is going to encourage more youths to come out and embrace the sport.

He disclosed that most of the teams that made their debut like the Nigerian Army and the Department of Security Service gave a good account of themselves at the championship.

Agara said it speaks volume that whatever perception anyone may have against it, the sport will go a long way especially with the support it is enjoying from the Minister of Youth and Sports Development, Mr. Sunday Dare.

“Our goal is to encourage the young athletes especially the Cadet category.

Asked about what to do with those discovered at the championship, he said they soon be called to camp for 2 months for a championship billed for Durban, South Africa later in the year.

He disclosed that the tournament will feature the Cadet, U-17 and Senior Cadre.

Also speaking at the medal presentation of the ceremony, the CDS said he was impressed by the standard of performance displayed at the championship adding that the Military being armed forces will welcome any athlete who can use it’s capacity to enhance the system.

“Any Nigerian wishing to enlist in the Military is welcome . We want them to use their capacity to boost the system.