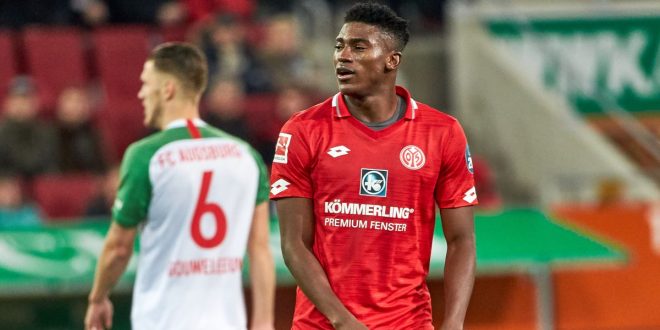 Awoniyi signed for the Premier League champions five years ago but the Nigerian youth international had a difficult time settling down at Anfield to be part of Liverpool first team squad.
Instead, the Ilorin-born striker has been shipped on loan to various clubs across Belgium, Germany, and Holland, including Gent, Frankfurt, NEC Nijmegen, Royal Excel Mouscron, and most recently Mainz.

The 23-year-old forward’s spell at Mainz, where he scored once in 12 games, did not go as he would have wanted.

But Celtic are eyeing up a move for the 2015 African U-20 champion, as the Scottish giants prepare for the imminent departure of first-choice striker Odsonne Edouard.

Awoniyi is currently valued at €3.2 million (as per transfermarkt), but Celtic may have to cough out three times that figure in securing the services of the youngster.

The Super Eagles hopeful has a contract tying him to Liverpool until the summer of 2023.