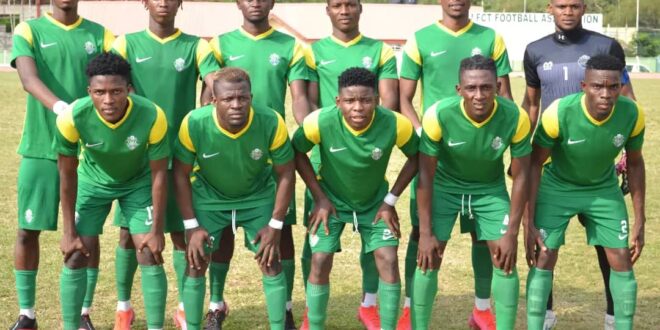 City FC Will Target Promotion To NPFL This Season— Adams

Technical Director of City FC Abuja, Mr. Moses Adams has revealed that his club will not miss promotion to the Nigeria Professional Football League in the forthcoming season.
Adams said having missed promotion to the elite class by whiskers last season they will go for the kill this season by grabbing the promotion ticket with both hands.
“Last season was our first and we are bound to learn some lessons with some teams here in Abuja given us some headache,” he said.
He said the aim of the club is to sell players to big clubs abroad for greener pastures but assured that this will not dampen their morale as they have injected fresh legs into the team for the challenge ahead.
“We are professionals on the job and it is not new to us losing players, we know players who can deliver, just about chossing the right players,” he added.
He pointed out that the team is embarking on a pre-season playing tour of Aba to kick start their new drive to gain promotion.
“We are going to Aba on November 17 for the preseason and as well as travel around Nigeria for some games.
He exuded confidence that the team will get promotion 100 per cent this time around unlike what happened last season.
“It is our job, we will never get tired of playing with our rivals in Abuja. Last season was our first in Abuja. It was a bit divided here with about 4 teams but we have learnt a lot from it.
He said some of their rivals at home have been relegated and that showed the difference of the preparation. There was no love then.
Adams said they want to give Federal Capital a Premier League team.
“Last season we taught having more teams in Abuja will give us advantage but not, we are going to take them more serious this time around, go in another direction and take them more serious like we take other teams outside the Federal Capital,” he concluded.