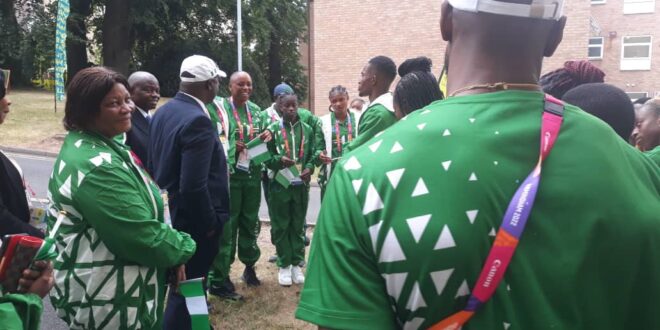 It’s as if bad times are never far away from Nigeria sports sector with another lack of proper planning  challenging the sector under Sunday Dare the Minister for Youth Development And Sport.

Alleged negligence and ineptitude by the Nigeria sports authorities have caused another ugly situation as Team Nigeria Arrived the 2022 Commonwealth Games in Birmingham, England without official kits. The team arrived in batches and while the opening ceremony was held on Thursday, July 28.

A United Kingdom sportswear manufacturer has however in a last-minute approach, decided to rescue with the production of kit for the Team Nigerian at the Commonwealth Games.

MG Sportswear in Kidderminster was approached to make hundreds of items on Tuesday after the team said they were let down by their suppliers.

Manager Gino Ruffinato said his 14 staff had been working around the clock to get the garments made.

As the Games begin, he will personally deliver the order to Birmingham later.

Mr Ruffinato said he initially thought Tuesday’s call from an unnamed Nigerian for the production of kits for Team Nigeria was a “wind-up”.

“As it progressed I started getting emails with orders on, so at that point I thought, hang on, I think this is serious,” he said.

“When they hit us with the deadline saying it needs to be there for Friday and today was Tuesday… there’s all the fabric, the print, the designs to get out in two days. It was a bit hair-raising.”

BBC reports that his team has been working long hours to fulfil the order, making 200 pieces of kit including running vests and shorts, staff tracksuits and even 400 Nigerian badges to adorn the sportswear.

The atmosphere at the factory has been “panic stations” he joked, but said: “Everybody’s embraced it, they’ve worked hard and done many hours to make sure it happens.”

Nigeria sent a 93-man team with 21 officials to Birmingham for the Commonwealth Games, which opened on Thursday night. The sporting events are already under way and will continue over the next 11 days.

“I still pinch myself – I’ll be looking on the telly and seeing the MG Sportswear brand for a national team,” Mr Ruffinato said. “It’s wonderful.”

Nigeria’s sports ministry headed by Mr Sunday Akin Dare have continued disagreement with sponsors with many questioning the sponsor that produced Nigeria’s kit to 2022 World Athletics Championship in Oregon, USA in which Nigeria’s name was wrongly spelt in one of the kits worn by the athletes.

In Japan 2020 Olympic Games, it was a similar situation as Team Nigeria were ordered to jettison an already produced and delivered Puma kits by the federal government led by Sports Minister, Sunday Dare.