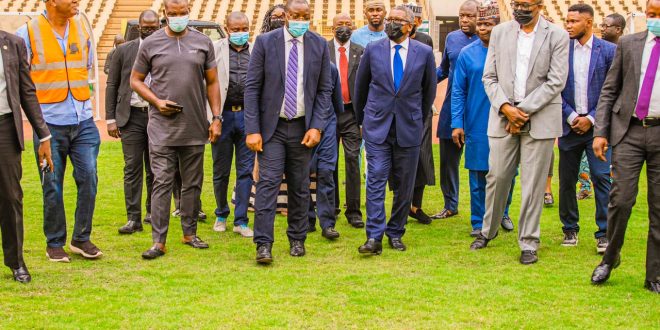 Dangote, whose company, Dangote Industries Group sponsored the rehabilitation of the pitch, expressed satisfaction with the job done, as he was conducted round the pitch with the sprinklers working perfectly, and the two Digital score-boards beaming live.

In his remarks, Dangote assured the Sports Minister of his continued support. “You can be rest assured of our continued support. You can always knock on our doors. We shouldn’t allow our Stadia to collapse. Nigerians have a very strong love for Sports, so I think we need to complement Government’s efforts to ensure that everything works”, he added. 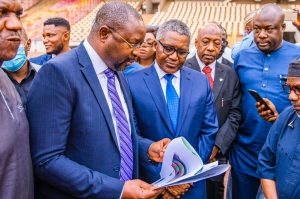 The Minister expressed appreciation to Dangote for accepting to adopt the Moshood Abiola Stadium, stating that he was the first to embrace the Ministry’s Adopt-a-Pitch initiative. “I want to thank you for investing in the development of our Sports and the fruit of that partnership has blossomed into what we see here today. I would like to inform you that we have just received CAF certification of this Stadium for international matches, which means that the World Cup qualifiers, will be played here. This wouldn’t have been possible without your support”, Dare emphasised.

The revamped Moshood Abiola Stadium is complete with nursery beds, two digital score boards, 24 Sprinklers and two-year maintenance, as part of the contract sponsored by Dangote Industries under the Adopt-a-Pitch Public Private Partnership initiative of the Ministry. 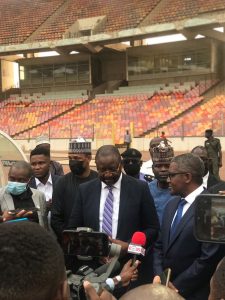 Daura Stadium Katsina has also been completed, while National Stadium Lagos amongst others have been adopted, and are at different stages of completion.