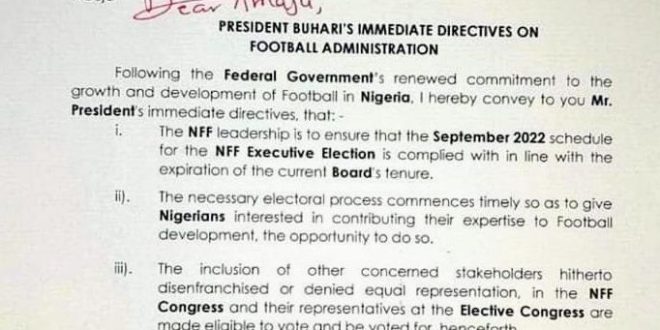 Don’t Stay Beyond your Tenure FG warns NFF Board

The federal government has warned the nation’s football governing body, NFF against any move to stay beyond September when the tenure of the present board expires.

In a letter addressed to out going NFF president, Amaju Melvin Pinnick, the FG made it clear that she won’t accept any tenure elongation.

The letter signed by Sports Minister Sunday Dare stated in part…”The NFF leadership is to ensure that the September 2022 schedule for the NFF executive election is complied with in line with the expiration of the current board,s tenure.”

The letter further directed Amaju and the incumbent board to throw the board open with the inclusion of other concerned stakeholders who were hitherto disenfranchised.

With the presidential directive, the era when a few cabal conduct and put themselves in the NFF board appears to be over.