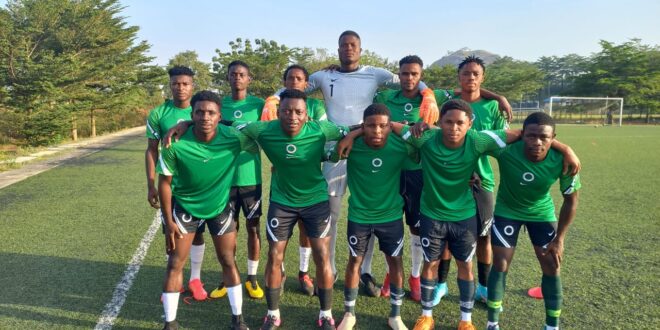 Nigeria’s U20  Boys, Flying Eagles on Thursday whiplashed Paul E Sports Academy 5-0 as the team continued its re-building process in preparations for next year’s U20 Africa Cup of Nations in Egypt.

Jonas Emmanuel opened the scoring in the 10th minute while Emmanuel Ekpenyong doubled the lead eight minutes before half time.

Substitute Obiakor Ifeshinachi bagged a brace in 65th and 71st minutes before Badamasi Umar set up Abdurahman Adam to complete the comprehensive victory for the seven-time African champions.

Coach Ladan Bosso and his lieutenants will continue the re-building process as the two-time World Cup runners-up play Capital FC on Friday and Kebbi-Selected team on Saturday.

The U20 Africa Cup of Nations will take place 18th February – 12th March, 2023 in Egypt. The top four teams will qualify for the FIFA U20 World Cup scheduled to place in Indonesia 20th May – 11th June next year.

Meanwhile, Chairman of the NFF Task Force on Youth Competitions, Alh. Aminu Balele Kurfi has implored the invited players to the Flying Eagles’ camp to be focused as the team continues preparations for next year’s U20 AFCON in Egypt.

Balele made the call on Wednesday  shortly after the team’s  evening training session at the Moshood Abiola National Stadium, Abuja. The Katsina State FA Chairman also charged the players to be displined during their stay in the team’s camp while urging them to face the task of ensuring the Flying Eagles make a statement in  February in Egypt next year.

Balele added the NFF Task Force on Youth Competitions under his watch is working on securing a camp outside the shores of the country to further prepare the team for the U20 AFCON in Egypt next year.

In his remark, Head Coach Ladan Bosso on behalf of the team thanked the Katsina State-born sports administrator for the visit and commitment towards the team while promising his technical crew and backroom staff are working out all modalities to make the nation proud in the forthcoming championship.