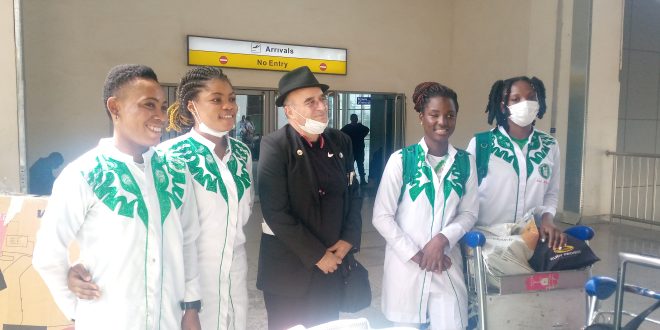 President of Cycling Federation of Nigeria (CFN) Giandomenico Massari, said the experience gained at the just concluded 2021 UCI Track Cycling World Championships in France will help to boast and growth the cycling in Nigeria.

He said this while speaking with Journalists at Abuja international Airport the moment the Athletes arrival Nigeria.

Massari noted that despite Nigeria made their debut in the world track championships they have been able to gather points which will aid their quest in qualifying for the 2024 Olympic Games in Paris.

“We have been able to gather points that would help our quest to qualify for the 2024 Olympics Games in France, the athletes themselves have gained a lot of experience have competed with former and present world champions” he said.

He further called on corporate organisation and private individuals to support the growth of cycling at the grassroot level in the country while commending the athletes and the cycling stakeholders for the great contribution so far.

“We competed amongst the best athletes in the world, this has further given us a lot of experience, so we just need to training hard and to go attend more competitions so that we can be at par with our counterparts outside the country.