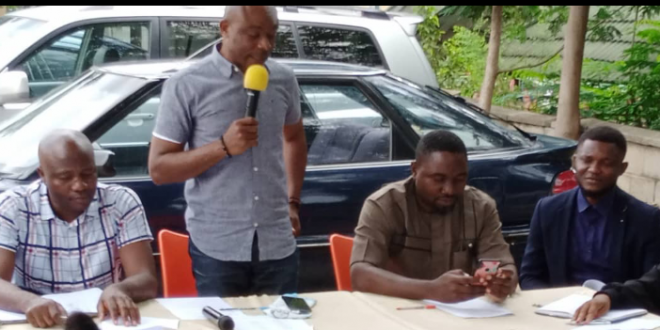 FCT NUJ CONGRESS:Disassociating Self From NUJ Will Count Against SWANi Members…Ogbeche

Editor1 July 18, 2021 Sports Comments Off on FCT NUJ CONGRESS:Disassociating Self From NUJ Will Count Against SWANi Members…Ogbeche 282 Views

Comrade Ogbeche made this declaration during the NUJ FCT Council Congress on Saturday shortly before FCT SWAN Chairman, Bunmi Haruna was inducted into the Executive Committee of NUJ.

Ogbeche assured the Haruna-led SWAN of all necessary support and promised to give the chapter a financial take-off.

He said: “Irrespective of any situation, the right thing must be done. We are in total support of the Haruna-led SWAN and that was why we wrote some letters to different agencies, Ministries and parastatals to recognise him and his members as the only SWAN body in FCT, and we will still write more letters when the need arises.

“As for those who disassociated themselves from NUJ, at the appropriate time it will count against them. We should be very careful of what comes from our mouths because sometimes we may not know the weight of what we say”.

“I wonder how someone will be benefitting from NUJ, by being part of the Executive Committee table because he was a Chairman of SWAN, and then turn around and say he is no longer part of the Union he benefitted immensely from in the past 3 years”.

“Bunmi Haruna will now replace the former SWAN Chairman, Ndubueze Chidoka on the EXCO.” He concluded.