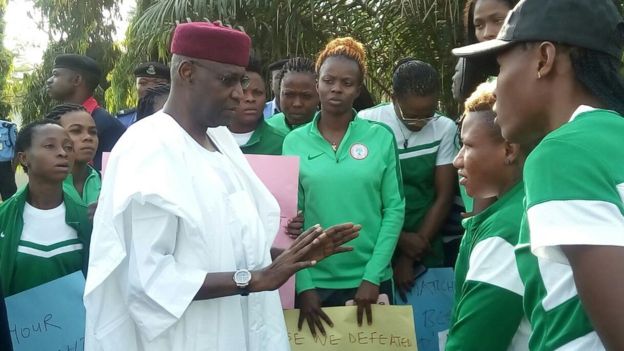 Just like the Chief of Staff to President Muhamadu Buhari promised the Super Falcons that all their allowances will be paid on or before Friday, we can reveal that the Federal Government has released a total sum of N471.8m for the payment of the allowances of Super Eagles and Super Falcons.

The Office of the Accountant General of the Federation (OAGF) released the mandate to Central Bank of Nigeria (CBN) for payment of Naira equivalent of US$1,173,820.00 at N305/$ to the bankrupt Nigeria Football Federation (NFF), for the payment of the outstanding winning bonuses for Super Eagles in the 2018 World Cup Qualifying matches and for the Super Falcons’ participation in the 10th Women’s Africa nations Cup (AWCON).

Super Falcons’ elongated protest of the non payment of their allowances at NASS and at the State House ignited the sympathy of the nation leading to a direct intervention by the seat of power, the Presidency.

According to the mandate, “this is in furtherance of the approval from Minister of Finance, Kemi Adeosun, for the said amount to be paid. The mandate, which is a sum of N358 million, was paid by Central Bank of Nigeria on Thursday,” a statement signed by Kenechukwu N, on behalf of the Accountant General.

Similarly, another mandate for N113.8 million has also been released by Office of Accountant General of the Federation for the payment of winning bonus for Super Eagles in the 2018 World Cup Qualifying matches and for the Super Falcon’s participation in the 10th Women’s Africa Nation’s Cup.

This amount has also been paid to Nigeria Football Federation account for onward disbursement to the players and their officials.

Nigeria's most authoritative online newspaper with a deep reach for the Defence of the truth at all times.
Previous American-Chinese business to invest in disability community
Next Rot in judiciary: NJC recommends dismissal, prosecution of Abia judge