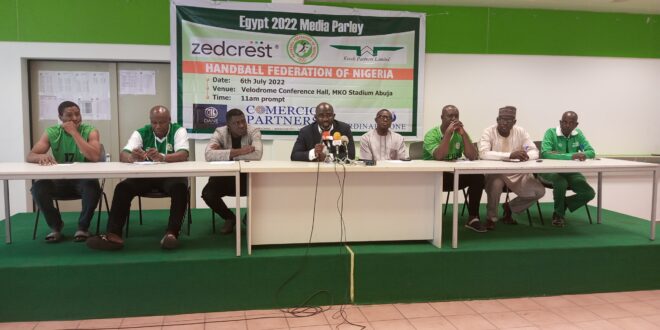 Editor July 6, 2022 Sports Comments Off on Go And Get Me The World Cup Ticket,  Ocheho Task Golden Arrows 10 Views

The president of the Handball Federation of Nigeria (HFN)  Samuel Ocheho has charged the Men’s National Handball Team Golden Arrows, to go and secure the ticket for the World Cup in Poland  2023.

He disclosed this on Wednesday during the media parley at the Moshood Abiola National Stadium Abuja.

African Men’s Handball Championship for 2022  will hold in Cairo, Egypt from July 9 to July 19 .

According to him, the goal of the Federation is for the team to book a slot for the country to feature in the World Cup next year in Poland and Sweden.

“In the last edition the team finished 10th out of 16 teams that participated in the tournament.

According to him “We are not asking them much, we are just asking them to secure ticket for the World Cup this is our target.

“We want Nigeria to be among the five countries that will represent Africa in the World Cup next year, “Ocheho said

Speaking further the federation president said they will continue to look for more sponsors to support the Federation in their various activities.

“Our sponsorship of five year deal with Prudent Energy Company Limited will end this year.We are looking on how we can renew the deal with them.

“We have Zedcrest Capital Limited a new cooperate body that will be supporting our activities.

“We continue to look for more sponsors to achieve our goal to make the sport popular like football in Nigeria.

“My target is to see children playing handball  on the road side if you are traveling from Lagos to Kano like they play football,” he said.

The team coach Rafiu Salami, has assured  Nigerians the team will have a better performance compare to their previous editions.

“The team is ready to make the country proud in Egypt, we had enough training session , we have touch all the department  and it’s our  time to have an outstanding performance as a team,  he said.

“We are determined to work hard and to be among the five county that will participate in the championship..

We started with 25 players in camp three months ago which including 8 foreign players. 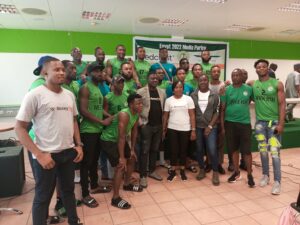 “We will be going with 16 players to  the championship in Egypt and return to Nigeria with the ticket,” he concluded.

Speaking on behalf of the Patrick Obinna, the captain of the team who plies his trade in  Israel, said they are determined to work hard to secure the  ticket Nigeria.

“We are well prepare for the Championship, we will give our best to be among the first five countries.

“We need to fight together and be strong as a team to succeed in the championship.

“We want the support of the federation in terms of kits  for the team and we also want them to do everything necessary to motivate us as player and team,”he said.

The Nigeria team, also known as Golden Arrows, will depart Nigeria on Saturday.

A total of 14 countries will participate in the Championship in Egypt which also serves as qualifiers for World Cup in 2023 in Poland and Sweden.