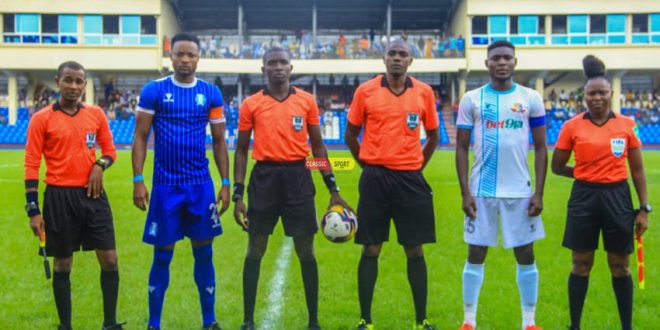 It is no more news that Shooting Stars Sports Club (3SC) of Ibadan were last Wednesday, held to a 1-1 draw by visiting Reno Stars, a result that did not go down well with the teeming fans of the home side.

However, the fans reaction after the encounter was due to the way and manner the game was handled by the match offficials, led by Habibu Ghali from Kano State.

Referee Ghali and his assistants, Friday Mfon Akpan (Aiwa-Ibom) and Umar Ibrahim Majidadi from Gombe State, openly displayed a performance that gave fans and every other persons the impression that they were out to ruin the home side.

Ghali and his assistants took decisions that left many wondering where they got the gut from, as they demonstrated through their officiating that they were sent to Ibadan on a mission.

Soccer fans, and even journalists watched in disbelief as Remo Stars were given undue advantage over the hosts, who played there heart out but were denied a well deserved victory by the arbiters.

Apart from deliberately killing goal bound moves of 3SC players,and ignoring a number of glaring penalty calls against the visitors, referee Ghali and his assistants, threw the rules guiding the game into the dust bin, failing to take necessary actions against Remo Stars for deliberate time wasting and rough tackles on the home team.

This poor officiating, actually led to the little crisis that hapoened after the match as fans, who hailed the home team for their impressive performance, showed their displeasure over the poor officiating.

For the records, that was not the first time referee Ghali will be dealing with 3SC this season. He was at the center on matchday 21 when the Oluyole Warriors Football Club hosted Gombe United.

Going by his performances in both games, one is begining to feel that he was sent on the two occasions to come and deal with the Oluyole Warriors, a mission he has successfully carried out with boldness and much confidence, all becuase of the belief that Ibadan soccer watchers are peaceful and will not overreact, unlike in other venues.

The fiasco that took place after that match would not have happened had the officiating been fair enough, therefore, Ghali and his people should be held responsible for the incident that followed, which could have been worse if not the tight security network put in place by 3SC, in collaboration with the Oyo State FA, Oyo State Sports Council and the security agencies.

The question is. Is Ghali being deliberately sent to Ibadan on a mission to ruin 3SC?.

The League Management Company (LMC), and the leadership of the Nigeria Referees Association (NRA)should take a look at the video clips of the match and review the performance of Ghali, who could have been in danger if it were to be some venues in this country.

Sadly enough, many sport journalists and other stakeholders who witnessed the shameful officiating by Ghali decided to look away on this act but focused attention on the attack on Mr Tobi Adepoju forgetting that bad officiating is a major problem facing NPFL.

This writer, will advice NPFL to do something about the said referee so as not to destroy all efforts been made by LMC to improve the league.