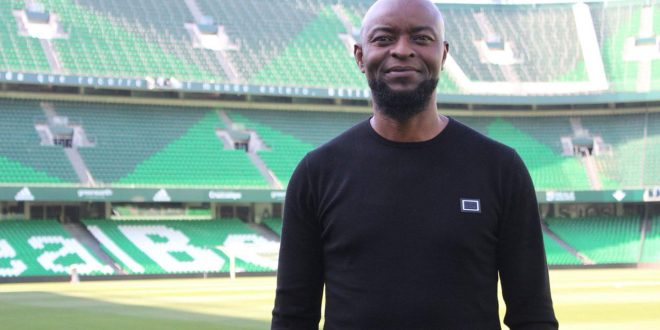 I Am Ready To Support Peseiro—Finidi George

Editor1 June 11, 2022 Sports Comments Off on I Am Ready To Support Peseiro—Finidi George 25 Views

Former Nigeria International and Super Eagles assistant coach, Finidi George says his appointment as a coach in the Senior national team, the Super Eagles has left him short of words and couldn’t find the right words to express his excitement to be among the coaching set up.

George in an interview said he was excited for the decision made to bring him in to the Super Eagles as coach.

Finidi won the 1995 UEFA Champions League with Ajax Amsterdam haven’t turn out for Real Betis in Spain had earlier put himself forward to coach the country’s cadet teams but was turned down twice for the position.

Finidi George who is currently the head coach of Nigeria Professinal Football League side Enyimba Int’l of Aba.

“It always an honour to represent your country either as a player or as a coach.” I’m excited to be appointed to join the team and contribute my part to the national team again as a coach,” he said.

“I’m are here to assist. Sometimes people get it wrong, your are the head coach, no I am assisting and we will do all in our possibilities to make sure that we succeed as a group.

“It doesn’t matter who is the head, we have to support the head coach (Peseiro) to make sure that he succeeds.

He is somebody that is very hard working and wants to win, we’ve seen it, we’ve been with him in the USA and we’ve seen is qualities and work ethics.

“His somebody that wants to win, and we that are home here, we have to give him that moral and every other support that we can give to him so that we all succeed together.

“I will do my best to make sure we get the team back to where it belongs with hard work, we will get there. I’m excited this decision was made to bring me here,” George concluded.

Previous NNL:City Fc Will Beat El-Kanemi Warriors —Odufeso
Next I am Done With Men In My Life – Tiwa Savage