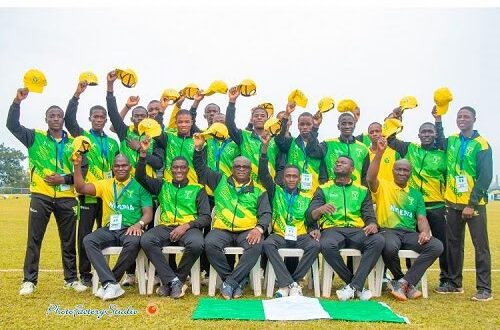 Editor1 October 3, 2022 Sports Comments Off on ICC U19: Nigeria May Get World Cup Ticket 12 Views

Nigeria continued her dominance at the men’s cricket World Cup Africa division 2 qualifiers in Abuja and has appeared as the favourite country to qualify from the division.

The Daniel Gim tutored side defeated Rwanda in the opening game on Friday as well as Botswana yesterday , winning both games by 10 wickets. The two victories has inched Nigeria closer to another World Cup dream.

The game at the Cricket Pitch B of the MKO Abiola National Stadium yesterday saw Nigeria win the toss and elect to bowl.

The Nigerian side had earlier won by 10 wickets ending in a 42-0 and 41-10 in the opening match against Rwanda.

Elochukwu Ndububem and captain Ridwan Kareem did most damage against the Botswana side, jointly taking out 6 wickets in 11 overs.

Nigeria will hope to continue its impressive run when they face Sierra Leone tomorrow in their last final group B game.

A total of six teams comprising of Kenya, Botswana, Malawi, Mozambique, Ghana, and Sierra Leone are currently featuring in the qualifiers with the top three teams to progress to the next stage of the World Cup qualifiers

Previous Daniella, Chichi Evicted In BBNaija Grand Finale Show
Next Sports Ministry To NFF GS No letter Signed By Him Henceforth, Will Be Accepted Or Treated