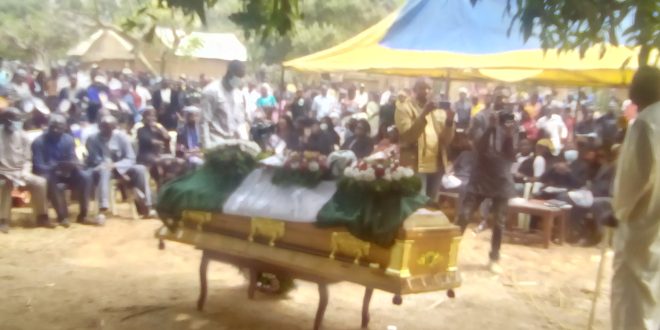 Justice Christopher Laid To Rest In His Village

Editor1 March 18, 2022 Sports Comments Off on Justice Christopher Laid To Rest In His Village 156 Views

The remains of former Nigeria International Pandur Justice Christopher has been laid to rest in his village Abwor Dyis in Pankshin Local Government, Plateau state on Friday the 18th of March 2022

Speaking during the funeral service, officiating  minister Rev. Dr. Amos Mohzo, while extholing Justice Christopher attitude on Earth said he never knew he he was a national hero and he was simply humility personified

Also speaking on behalf of the family his Uncle, Mr. Longs said Justice Christopher was destined to play football starting out from the Barracks in Kaduna as a kid, while used opportunity to call on the Nigeria Football Federation, the state government to immortalized him and also to help out with scholarship for the 3 children he left behind.

One of his friends and teammates kelechi Okoye said, he was the peacemaker among his friends and they will always remember him for standing for the truth and the role he played whenever there is misunderstanding among them.

Plateau State FA Chairman Hon.Sunday Longbap who spoke on behalf of the Football Federation, praised the exploits of Justice Christopher for his community, the state and the nation saying.

‘We are only gathered here to celebrate Justice Christopher testimonies, The Nigeria Football Federation is sad that one of his hero is no more, a hero that salvage his life for the sake of his community, the community of Nigeria up to the international community the family that gave birth to him never expected his heroic feat but today we are very proud that a son of Plateau has taking our name to the international stage, Longbap said. 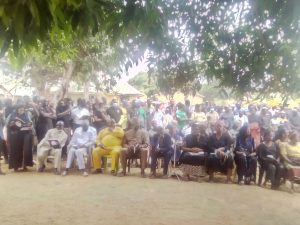 Executive Board member of the Football Federation, Hon Suleiman Yahaya Kwande who represented the NFF President Amaju Melvin Pinnick said the Federation will look into the family request to immortalized Justice Christopher who played for Nigeria from the age grade to the Super Eagles and represented Nigeria at the World Cup in Japan/Korea in 2002 World Cup.

Justice Christopher played both in Nigeria and abroad, playing for Kastina United, Sharls of Port-Harcourt and Bendel Insurance while he dorn the Jersey of Levski Sofia of Bulgaria and Royal Antwerp FC Belgium, he also Captained the Nigeria U-20 National team, the Flying Eagles to the 2001 Africa Youth Championship in Ethiopia, playing eleven times for the Super Eagles which includes an African Cup of Nations appearance and World Cup all in 2002

He is survived by his aged mother, 3 children and sisters and brothers 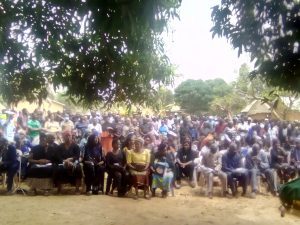 His body was committed to mother earth at exactly 12:15 pm in his family compound in Phikong, Abwor Dyis in Pankshin Local Government Area Plateau state.

Previous Purported FIBA Letter:A Slap On The Face Of The Federal Government Of Nigeria
Next Former Anambra First Lady is a Drunk–Bianca