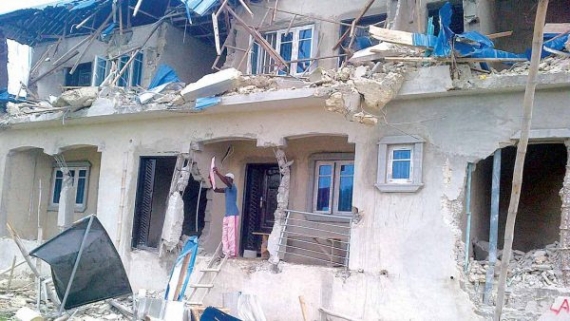 *As properties worth about N15billion demolished

As millions of Nigerians prepare for the Yuletide with reservations due to the economic recession, thousands of residents of Olokonla town vide Ogombo village in Eti Osa Local Council of Lagos State, will be marking Christmas in pain, anguish and agony. Their homes have been wantonly demolished by armed military men on the 16th December.

Over 50 armed military men stormed the community and demolished over 200 properties valued at over N15 billion. Many of the landlords and occupants of the demolished building, who attempted to protect their properties were beaten mercilessly, while others were severely injured and are presently receiving treatment at different hospitals.

Narrating his ordeal, one of the victims, Mr. Utomi Michael, whose multi-million naira property was not spared, said: “I bought the 17 hectares during the administration of Bola Tinubu and we were issued all necessary official documents.

It was initially 24 hectares. I later conceded seven after a protracted court case.”

Michael disclosed that he is the one that sandfilled the entire 17 hectares and built property worth over N500 million on it, which was destroyed in a swoop.

Another landlord, Mr. Kenneth, whose three-storey building was razed down, retorted in tears: “Where do they want me to start from?”

Another victim, Mr. Olufemi Akinde claimed his demolished property was worth N70 million, apart from another four plots of land he acquired.

Worshippers of In His Presence Christ Tabernacle, a church building that was also demolished, said the action, irrespective of whoever authorised it, was against the tenets of democracy and principle of justice, fairness and equity. It was a slap on democracy.”

Meanwhile, the solicitor representing the families of Bakare, Orebiyi, Seidu Ogunleye, Idowu Bakare, Amonja Oseni and all residents of the town, Aremo Oladotun Hassan, in a petition submitted to the Lagos State Assembly, has alleged that there are strong indications some cabals within the state government were acting on instruction to implement the demolition.

Part of the petition reads: “On December 8, 2016, copies of some contravention notices dated December 6, 2016, were posted on some of our buildings by men who claimed to be officers of the Ministry of Physical Planning and Urban Development, with a threat of demolition.

“We promptly asked our solicitors to write the ministry, the Attorney General and Commissioner for Justice, the general Manager New Town Development Agency (NTDA) among other agencies, intimating them that the matter concerning the land was before Justice Olokooba at the High Court of Lagos in Epe.

“However, on December 16, around 7:00a.m. the residents woke up to witness a willful, unlawful, malicious and an unprecedented, mass destruction of their property by military personnel being ably supported by thugs who rode in a Toyota Hiace bus belonging to the Ministry of Physical Planning with registration number LA 200A76 and a Hilux Sports Utility Vehicle with registration number BW 703 AGF.”

Although, a source from the Assembly confirmed the receipt of the petition, he said the lawmakers were yet to deliberate on it, while officials of the state government, who reacted on the issue, though on the condition of anonymity, said the matter was being looked into.

Nigeria's most authoritative online newspaper with a deep reach for the Defence of the truth at all times.
Previous Boxers set Ibadan aglow for Aiyegbeni memorial tourney
Next ECOWAS to use military to force Jammeh out of Gambia