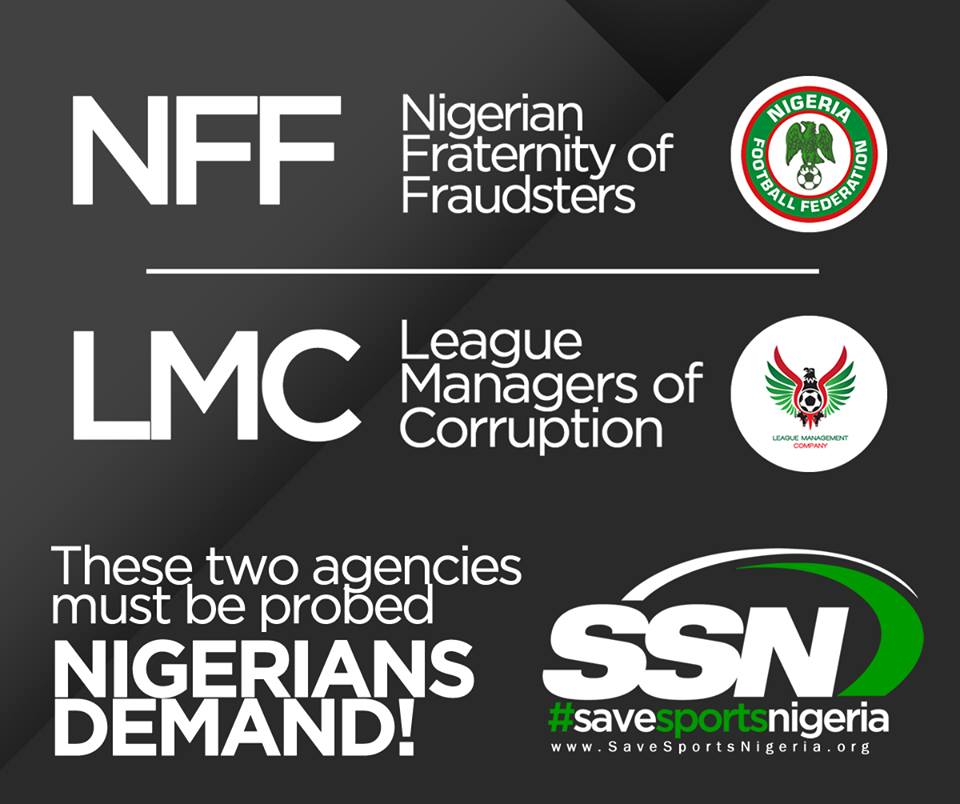 LMC is the most fraudulent company in Nigeria – SaveSports Nigeria Group

GongNews December 21, 2016 Featured, Sports Comments Off on LMC is the most fraudulent company in Nigeria – SaveSports Nigeria Group 448 Views

*Ejected over rent after squandering N87.6m on office

*Buhari should declare state of emergency on our football

We suggest that the President of the Federal Republic of Nigeria should go ahead and declare a state of emergency on the nation’s football. It is reeking of corruption and until these terrorists who have held the game captive are sent out by a force majeaure we may be carefully grinding the sport.

These were the words coming from Architect Samson Idowu Ajakaiye, the spokesman of the SaveSportsNigeria (SSN). He said, “Mallam Shehu Dikko should be asked about the $8million SuperSport South Africa paid for the three years sponsorship money. If converted at the rate of N300.00 to the Dollar being the prevailing rate then, that amounts to N2.4billion.”

The value in kind signed by the league was supposed to be N200million for balls and bags for the clubs. What happened to that money? The league takes N5million weekly for night matches to buy diesel! That apart, they collect N200,000 every week for office rent.

There’s much more we want to confirm before we go public. Truth is the LMC officials have the so-called club owners on their pay roll. They also ensured that most of the sports journalists who can expose them are bribed with cars, choice matches where they are paid weekly.

The Architect disclosed that, “the owners of the Lobito Crescent premises where the League Management Company (LMC) had occupied for two years would have been smiling to the banks and thanking their stars for a client that does not know what to do with their money.

However, it doesn’t come free. Unconfirmed sources claimed that the former Hon Nduka Irabor management that rented the place in the first place extended the private interest of a “relation”, a lady.

Investigations conducted showed that the LMC fucked out on a daily basis, weekends and holidays inclusive, the sum of N120,000.00

Now, the money being taken out for the same purpose is just N200,000 weekly. N80,000 more than what it was at the beginning. Meanwhile, for the two years they occupied the premises, the LMC paid out a whooping N87.6million. In view of the skewing of their finances below the zero line, it was obvious they were going bankrupt.

They were reportedly ejected when they could not pay again. So, they moved their things into the cars of the staffers before heading to the Maitama premises they could pay for just one year.
We can reveal with authority however that this same organisation deducts monies in the name of taxes from the casual workers in the company but the monies are not remitted to government. It is a criminal contraption.

Nigeria's most authoritative online newspaper with a deep reach for the Defence of the truth at all times.
Previous I won’t step down, Gambia’s Jammeh tells ECOWAS
Next DSS scuttles planned anti-government protest by Saraki’s aide