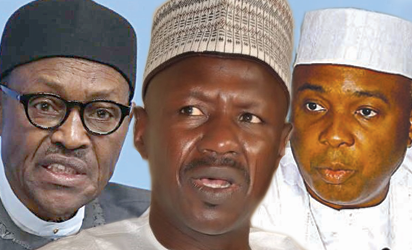 Nigerian Senate is fast becoming more powerful by the day. That seems to be the desire of its members who describe themselves as distinguished. Although it is a law-making body which puts it within the legislature, its posture sometimes makes it look like it also has both executive and judicial powers and that it can in fact control everyone else. Hence, it often dishes out instructions which it expects everybody to obey. The latest is its call on President Muhammadu Buhari to suspend and ensure prosecution of Babachir David Lawal, the Secretary to the Government of the Federation (SGF), over some alleged improprieties in handling contracts awarded by the Presidential Initiative for the North- East Zone.

The call was informed by the findings of an ad hoc committee on mounting humanitarian crisis in the north-east which indicted Lawal’s company, Global Vision Ltd., as one of those which benefitted from inflated and phantom contracts. Lawal’s firm was said to have been awarded a N200 million contract to clear ‘invasive plant species in Yobe State. The committee also reportedly found that as of the time the contract was awarded, the SGF was still the director and signatory to the company’s account. These are no doubt weighty issues which the Senate has publicised. But unfortunately, Lawal’s defence was not similarly revealed to enable the public fully appreciate the gravity of the subject.

Instead, what is known is that the invitation to Lawal to appear before the ad hoc committee was largely ignored as the response to the invitation did not come from the SGF but from an official in his office. If so, why did the Senate in the interest of fair play not give the accused another chance or chances, to appear before it as it normally does to other government officials it usually summons? On this score, it is not irrational to regard the hasty conclusions of the Senate as premature. What is more, is the Senate supposed to get an allegation against a member of the Executive, investigate it, pass judgment, prescribe punishment and insist that its resolutions must be implemented?

The futility of such a posture has eventually come to light now as the President has now directed that the allegations be investigated. The Senate to my mind has not only jumped the gun but has put in the sub consciousness of people that we have a corrupt SGF thereby putting any new investigators on a very tight corner. If Lawal is at the end found to be innocent, many will see it as a cover-up. Bearing in mind that only the Judiciary is empowered to find any Nigerian guilty of a criminal offence, Nigerian legislators need to watch their tendency to do the jobs of other bodies. If however the SGF is eventually indicted, he should be prosecuted without delay. Until then, the call for Lawal to leave office is premature, more so when no legislator is ever willing to leave office because of an allegation.

The case against Ibrahim Magu, the Acting Chairman of the Economic and Financial Crimes Commission (EFCC) was similarly poorly handled. The story was that the Senate turned down the confirmation of Magu because it got a report from the Department of State Services (DSS) concerning some alleged wrong doings of the man. Magu ought to have been appropriately screened against the backdrop of the report so that the Senate can make an informed decision. The point is that the DSS report is only one of the sources of the Senate in data gathering for screening nominees. Any information gathered from a source ought to be tested. For example, the nominee was alleged to be living in a house belonging to a person under the investigation of the EFCC. Whether this allegation is true or not would have become clearer if the FCT Minister whose Ministry reportedly furnished the house was invited to explain his role in the furnishing of the said accommodation. But no such thing was done. What the Senate is empowered to do is to screen a nominee.

It is NOT empowered to decline to do so. If it refuses to screen a nominee it cannot determine whether he passed or not. It was thus wrong not to have given Magu a chance to comment on any negative report in the custody of the Senate. This column had cause in the past to caution the Senate on trivializing the screening of nominees for important appointments because the subject is a constitutional duty. Two of such cases remain instructive. The first was the “bow and go” clearance of Abba Moro to become Minister of Internal Affairs. By the time the minster turned himself into a recruitment authority for his Immigration parastatal leading to the death of some Nigerian applicants, the Senate could no longer query him as he did not initially satisfy anyone that he could do a good job.

The second was the exemption from screening given to Musiliu Obanikoro to become a Minister. So, happenings during his tenure as Minister of state for defence especially the Ekiti governorship election must be partially blamed on the Senate. David Mark’s Senate is thus remembered for its bow and go screening. Will Saraki’s Senate become known for closing the doors on some nominees without a chance to explain their side of any allegation? Well, the price of such a posture has already adversely portrayed the Senate as a body that sings discordant tunes. What happened was that only a hand full of members at a closed session instead of the Senate as a body concluded the subject thereby making the Senate to lose cohesion on it.

Whereas the Chairman, Senate Committee on Media and Public Affairs, Sabi Abdullahi, announced the rejection of Magu, a member as important as the Senate leader, Ali Ndume countered it. So, the nation is now in the dark on whether Magu has been rejected as Chairman of the EFCC or if Babachir Lawal will be removed as Secretary to the Government of the Federation! We can only hope that the controversy was not created for horse trading during Christmas and end of year festivities!

Nigeria's most authoritative online newspaper with a deep reach for the Defence of the truth at all times.
Previous Song defeats stroke to live again
Next SUNDAY SERMON: Supernatural conception of Jesus