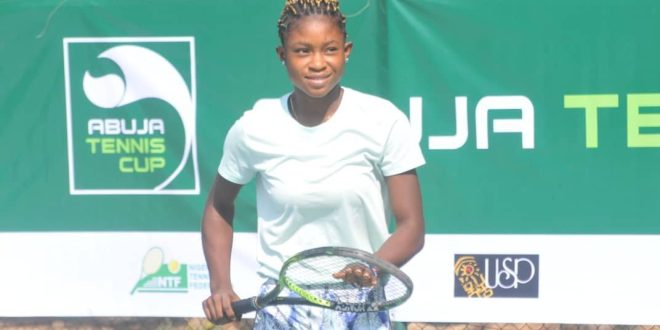 Editor1 May 22, 2022 Sports, Uncategorized Comments Off on Marylove Is The Champions Of 44th Edition CBN Tennis Open 8 Views

Marylove Edwards defeated Aanu Aiyegbusi in the final of the female category of the 44th edition of CBN Senior National Tennis Open Championship.

“I fought hard to earn this victory unlike last week where I was defeated by Oyinlomo, I fought to have the victory.

” Aanu played and fought well also but I am happy that I won the match. My target is to participate in major International competition,”she said

In Wheelchair Alexander Adewale, Omisore Kafayat on Saturday in Abuja have emerged champion

In the final match of the male competition of the wheelchair Adewale defeated Yusuf Wasiu the seeded number two 6-2 7-6 7-5 to emerge champion.

Speaking after the match, Adewale said he is happy to remain the champion in the male category.

“I won the last year edition and I have won more than four championship consecutive.
My opponent Wasiu has always been my rival in any competition.

“I thank the Federation and CBN for organising this champion,”he said

He said his target is to participate in the forthcoming paralympic in Paris in 2024.