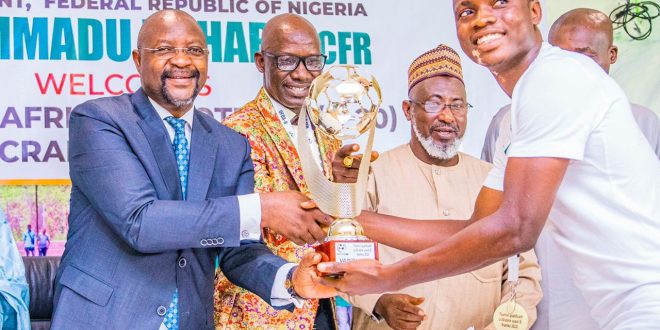 Editor1 May 24, 2022 Sports Comments Off on Minister Hosts Flying Eagles in Abuja 12 Views

Minister of Youth and Sports Development, Hon. Sunday Dare, on Monday hosted Nigeria’s U-20 Boys National team, after their successful outing in Niger Republic, winning the WAFU-B U20 Championship.

In a reception organized to celebrate and spur the team, the minister congratulated the technical crew, players and the backroom staff for conquering all foes at the sub -regional event.

He said “Nigerians are immensely proud of you and the hearts you all put in, to achieve this success. It is an indication of how far you can all go, if the hard work continues. You showed dexterity, grit, zeal and the mindset needed for success. I congratulate you all, once again.”

The minister also thanked the NFF for facilitating the team’s departure to Niger Republic ten days before the kick off of the tournament, describing it as the tonic that aided the drive.

Sunday Dare emphasized that the future of the Super Eagles lies on the foot of this generation of young players who showed the never-say-die spirit of Nigeria in Niger Republic.

Also speaking at the event, the Secretary General of the NFF, Dr Sanusi Muhammed thanked the Ministry for giving the Federation the right environment to thrive with the U-20 team. He promised that the NFF will stop at nothing to make sure the team is really for the U20 AFCON.

The Flying Eagles will be one of West Africa’s representatives at the U-20 African Cup of Nations, which will be hosted by Egypt in 2023.