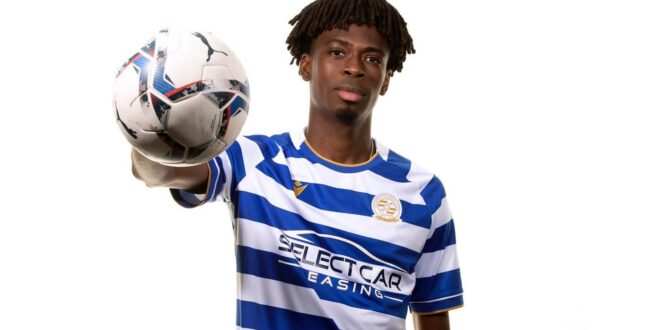 My Son Dream Is To Play For Super Eagles… David Ejaria

Editor October 27, 2022 Sports Comments Off on My Son Dream Is To Play For Super Eagles… David Ejaria 64 Views

Reading FC Attacking midfelder Ovie Ejaria has once again declared   his intention to play for the Super Eagles of Nigeria.

According to his father David Ejaria, who spoke with Gongnews.net about the dreams of his ward, said “My son has never hiding his love to play for Nigeria national team and the dreams he has always nurse as a kid.”
Speaking further he said, “Yes, my son has always been interested in playing for Nigeria since he was 13/14 years old and he  went to  the U-17 screening years back all  because he has  always wanted to play for Nigeria.
His interest in playing for Nigeria isn’t something that started today the father said.
Ovie Ejaria is eligible to represent Nigeria internationally.  Having trained  with the Nigeria under-17 team in 2013 and he has categorically stated that his international allegiance lay with the country since  2014.
He was selected for the England under-20 team in the 2017 FIFA U-20 World Cup, he made his first start in a game in the first round match against South Korea, and came on as a substitute the quarter-final against Mexico.
In December 2019, Nigeria national team coach Gernot Rohr urged the Nigeria Football Federation to get Ejaria to switch allegiance to Nigeria.
And according to his father Ovie has done everything possible for him to wear the Nigeria National team Jersey and the time for him his now after doing all that was required of him to do.
Ovie  has already written to notify the English FA his intention to play for the Super Eagles of Nigeria anytime soon and he just hope that it will happen now and the former Liverpool youngsters is working seriously to also switched club and to the Premier league the father concluded.
Share