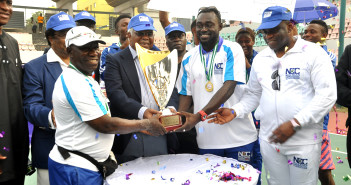 Team Tombim, last year’s NCC League winners, based in Abuja which had already qualified for today’s finals by defeating Team FCT 6-1 in the first semi-finals played in Enugu last week, is seemingly set to win this year’s edition again.

The matches are scheduled to start at 10 am with Barrister Solomon Dalung the Minister of Youth and Sports Development expected to be at the event as the special guest of honour. Professor Umar Danbatta, the executive vice chairman of the NCC and Nigeria’s tennis great, Nduka “The Duke” Odizor are also attending as guest of honour and special guest respectively.

Anu Aiyegbusi finally beats Agugbom: The other leg of the finalist became a basket of skill exhibition as Kaduna-based Team Offikwu and the Civil Defence team ended with 2-2 major score at the Abuja National Stadium Tennis Centre Court on Saturday.

The tie breaker will be achieved Sunday morning before the proceedings for the final matches takes the centre court.

Aiyegbusi’s victory is historical, record-setting and unique. Aiyegbusi, with a top five women’s singles ranking has never beaten Agugbom in her career. She finally broke the ice dusting her tough opponent with velvety skill. She primed and pulled-off the upset.

“The players have been in camp since they qualified for the semi-finals and are ready to play their hearts out on the court. I have told them to remain focused and not allow anything or anybody to distract them.

“We are playing against a very strong team with very experienced former champions like Abdulmumuni Babalola and Shehu Lawal who have Davis Cup experience. They also have women’s champion Christie Agugbom but we have younger players who are current champions and that can be the difference.

Mr Offikwu’s optimism is well founded as Team Offikwu has the current Dala Hard Court Champion, Sylvester Emmanuel to lead the onslaught. Emmanuel will be backed by Albert Bikom, a doubles specialist who says, “I can beat anybody in singles if I am charged  and N7 Million is enough to charge any one.”

Maiden edition of the NCC League: It would be recalled that after eight months of hostilities among tennis players across the country in the maiden edition last year, Tombim Tennis Club of Abuja won the Nigerian Communications Commission (NCC) Tennis League.

The team that paraded players such as 2014 winner of the men’s singles of Governor’s Cup Lagos Tennis Championship, Moses Michael, runner up of that year’s women’s singles of the Governor’s Cup, Sarah Adegoke, Henry Atseye, Mbanu Onyeka and Christy Mbadiwe, were adjudged the champions of the maiden Nigerian tennis tourney after they defeated Team Civil Defence of Ibadan in a two-legged match that ended 4-2 at the Lagos Lawn Tennis Club Onikan.

The team were given a golden trophy and a cash reward of N5 million, while the runners up, Team Civil Defence pocketed the sum of N3 million.

The Abuja team were not so lucky in the women’s singles category as they lost to the ladies of Team NCDSC who won the two-legged finals 6-3. Other teams that took part in the league included Team FCT, Abuja; Team Ogun State; Team Delta, Asaba; Team Kalotari of Port Harcourt; Team Anambra of Onitsha; and CBN Features of Kaduna.

Nigeria's most authoritative online newspaper with a deep reach for the Defence of the truth at all times.
Previous Rivers re-run election: Who wins this battle?
Next 10-point fiscal roadmap to reset Nigerian economy – Adeosun