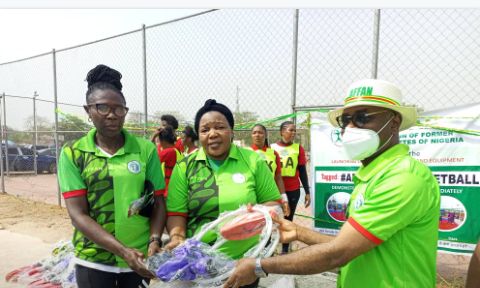 Netball Has Come To Stay In Nigeria–Gumel

Editor1 April 5, 2022 Sports Comments Off on Netball Has Come To Stay In Nigeria–Gumel 6 Views

Gumel said it when unveils the first Netball Court in Nigeria on Saturday at the old parade ground, in Abuja

According to him , they have working hard to bring back the game into the country and this is the first netball court in Abuja and in the country.

“Netball is being play in Africa and most especially in South African, we have been discussing on how to bringing back netball in Nigeria.

‘The game was played in Nigeria and it disappeared, now I’m happy that netball is now back in the country,” he said

He said the international Federation of Netball are ready to give us all the support they need to popularise the game.

“The International body have sent these equipments to Nigeria and we will distribute to all the zone in the country so that the sport will continue to develop in the country.

“The NOC is ready to give all the necessary support to develop Netball.

” I have decided to encourage and support AFFAN to develop the sport in the country and to have a national team that will represent the country.

Kunle Opeifa, AFFAN financier said they decided to partner with AFFAN to promote sport in school.

” Government can not do everything that is why the private company have to take responsibility and there is nothing like the government.

“Government is a group of people that we chose to represent us.If the government fail the incident of the failure come back to us.

“We decided to partnership with the AFFAN and this partnership in our own way is to ensure we promote sport in schools.