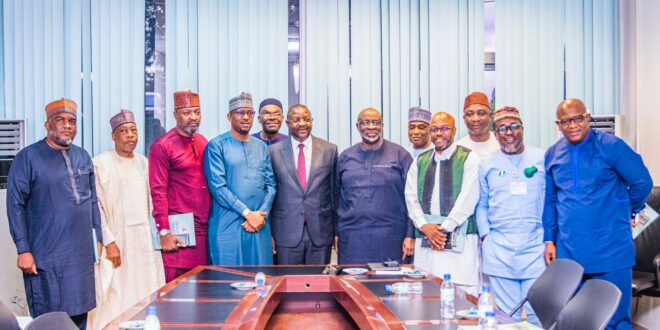 Unhappy looks dominated the faces of some of the Nigeria Football Federation, NFF Presidential candidates after their meeting on Tuesday with the Minister of Youth and Sports Development, Sunday Dare at his Moshood Abiola National Stadium, Abuja office.

While hissing out of the meeting, Alhaji Shehu Gussau, who had stormed the meeting in a convoy of five SUV Jeeps with security personnel that included the Department of State Services (DSS), bluntly declined chat with the waiting sports journalists, as he said, “I don’t have the chance to talk”.

The NFF First Vice-president, Barr Seyi Akinwunmi said, “We just had discussion with the Minister as to where we are heading to in Nigeria football. It was a successful deliberation, and there is nothing that makes anyone frown. Nothing controversial beyond the fact that we are all going back to continue our campaign ahead of the election.”

The FCT FA Chairman, Abba Muktar Mohammed, one of the contestants that volunteered to speak with the waiting journalists, said they will respect the court order stopping the federation from holding the Elective Congress on Friday.

While responding to questions, he said, “It was a meeting of stakeholders with the Minister of Sports. The Minister is the leader of Sports in Nigeria and we obliged the meeting to have a dialogue regarding issues on ground.

“There are some decisions that we expect the Electoral Committee to look at that has to do with advise from security agencies. Of course, there is a court order, we all know. We are all law abiding citizens and so we will see to it. In the coming days, the court order can be vacated but as law abiding citizens, we will follow what court says. It is an ongoing discussion. There is no conclusion yet. In the next few days we will hear more. We hope that at the end of the day, there would be a credible process acceptable to everyone for football to begin to flourish again.

However, if the court order is vacated before Friday, the NFF Elective Congress will go on as scheduled.

Alhaji Abba Yola told Page3news.com.ng afterwards that it was more like a family meeting the contestants held with the Minister.

The Ciroman Yola, who is the Chief of Staff to the Minister said efforts would be made to ensure there is peace in the NFF elections.