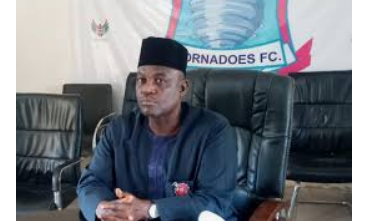 Niger Tornadoes Is A Product Of Hardwork And Commitment…Aliyu

Editor1 September 10, 2021 Sports Comments Off on Niger Tornadoes Is A Product Of Hardwork And Commitment…Aliyu 162 Views

The Ikon Allah Boys are on the verge of promotion to the Nigeria Professional Football League (NNL).

They only need at least a point to be sure of promotion to the elite league in their final group game against Gombe United on Saturday.

“This is a great achievement on the part of the boys. I want to thank God Almighty and also give kudos to the coaching staff and players for a job well done so far. We can’t afford to celebrate yet,” Aliyu said.

“Before the Super 8 we planned very well and set our target. The success story of Niger Tornadoes in the regular season and Super 8 play-off in Enugu is a product of hardwork, patience and commitment from the squad in ensuring that our set objectives for the season are achieved.

“Credit too must go to the Niger State Government for providing financial backing to the team and indeed the Executive Governor, His Excellency Abubakar Sani Bello personal interest in sports and the state-sponsored team, Tornadoes.

“We have set a standard and the technical crew have done extremely well looking at the process of players recruitment and executing matches to getting the needed results.

Meanwhile, Aliyu confirmed: “Our Governor put a call through to the team after the victory against Elkanemi Warriors and one of the promises he made was to gift the team a bus once everything is sealed.”