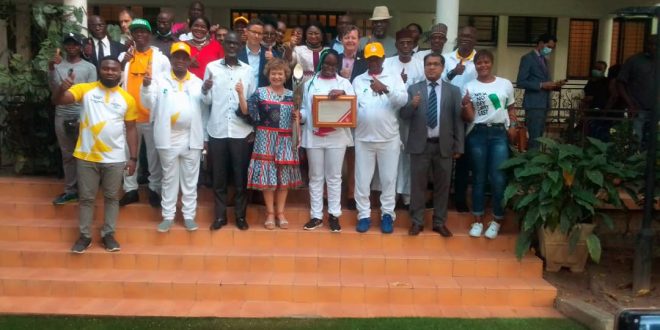 The Queen’s Baton Relay (QBR) is the traditional curtain raiser for the Games.  It begins when the Baton, containing a message from the Queen, departs from Buckingham Palace on 7 October 2021, and travels through all 72 nations and territories taking part in the Games, serving as a focal point for a programme of activities and media moments.

The global journey will conclude at the Birmingham 2022 Opening Ceremony.  Queen’s Baton which arrives in Nigeria on Friday

Speaking during the brief ceremony to celebrate the arrival of the Birmingham 2022 Commonwealth Games Queen’s Baton Relay, organised by the British High Commissioner in Abuja.

The President of Nigeria Olympic Committee  Engr.Habu Gumel, express our profound gratitude to the Commonwealth Games  and the Birmingham 2022 Organising Committee for their collaboration on the Baton’s visit to Nigeria.

He noted that all arrangements have been made for qualifier which has start with the training already.

Nigeria has been doing very well in the Commonwealth game even the last one in  Australia.

He said: “I want to assure you that Nigeria teams would make us proud at Birmingham, the commonwealth Sports Foundation in collaboration with Commonwealth Nations is using sport to encourage mass paricipate in sports especially by youths to harness potentials deliver health education, good governance and promote gender equality.

On her part, the British High Commissioner to Nigeria, Catriona Laing, described the event as another remarkable milestone of the Commonwealth Games which signified peace, unity and love among the community of nations.

She said: “The commonwealth games is about humanity, equality and diversity of Nigeria games, the 2022 commonwealth games will have more medal for women this time than men, because 136 for women 130 for the men that because we’ve included for the very first time the women’s cricket team are playing, so. I think  it’s really good examples of why the Commonwealth it’s the principles of diversity inclusion and humanity,” she said.

Birmingham 2022 Commonwealth Games will take place from 28 July to 8 August 2022 featuring thousands of world-class athletes and a global broadcast audience of over a billion.