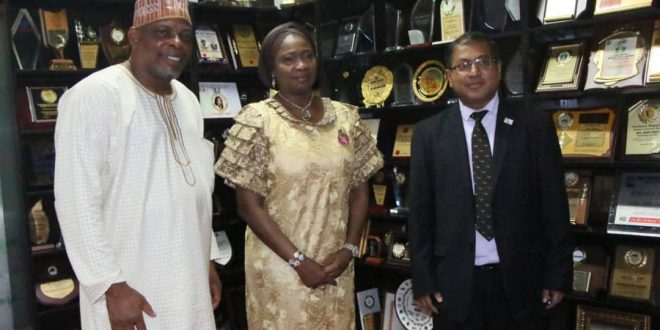 The High Commissioner of the People’s Republic of Bangladesh to Nigeria, Mr Musudur Rahman has expressed the desire to share best practices with Nigerians in Diaspora Commission (NIDCOM) to boost diaspora performances.

He stated this when he paid a courtesy call on Chairman/CEO, Nigerians in Diaspora Commission (NIDCOM), Hon. Abike Dabiri-Erewa, in Abuja.

According to the diplomat, Bangladesh has a full Ministry of Expatriate Welfare for its Diasporans.

The Ambassador described the setting up of NIDCOM as a step in the right direction , describing Nigerians in the diaspora as responsible, resilient and resourceful especially in the area of nation building in their host countries.

Rahman stated that there is need for both Nigeria and Bangladesh to deepen their
bilateral relations due to the outstanding performance of Nigerian Diasporans all over the world in terms of technology, innovation, trade and commerce.

He added that the synergy will not only enhance the
performance of the diaspora but will also benefit both countries in many areas of national development beyond Diaspora remittance.

The envoy also stressed the need for the NIDCOM and Bangladesh Expatriate Welfare Ministry to work together to share best regulations and policies in order to enhance Diasporans performance by making available platforms and training programmes to prepare them in terms of language, basic local food services, dressing, culture and many more.

Rahman stated that even though the number of Nigerians living in Bangladesh was not much, but the quality is what they appreciate.

He said that Bangladesh was able to raise over $23 billion annual remittances from its estimated five million Diasporans all over the world , stressing the role of its ministry for expatriate affairs in that regard.

Rahman opined that Nigeria with its population size and influence can do even much better
as they are one of the best all over the world.

Dabiri-Erewa, while responding, reiterated that the impact of Diasporans cannot be over-emphasised, hence the need for both countries to explore opportunities to create platforms and policies for Diasporans engagement especially in the areas of job creation and development of their economies

She said that Nigeria and Bangladesh have many things in common in terms of cultural and diaspora affinity and if properly organised would enhance their respective national development.