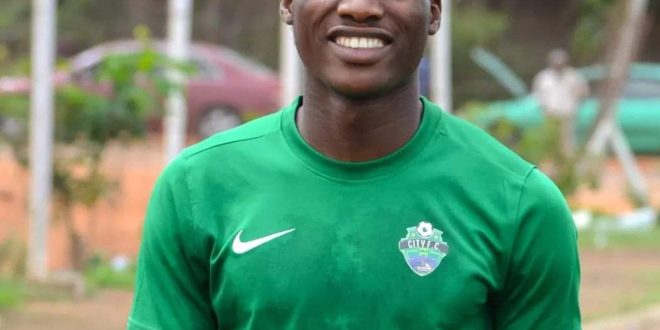 City FC striker, Mujeeb Odufeso has revealed he sees nothing but a “straight win” for the Citizens on Sunday against El-Kanemi Warriors FC.

The goal-machine , who was a former player of the northeastern club narrates what it feels like playing against his formal employers.
“It’s not going to be an easy one, because we know each other. We know ourselves, they know me. It’s just for me to put in more effort – double my effort – because I need to show more quality on that day. I need to put in my 100 percent. It is in this kind of games that you need to show the stuff you’re made of.”

Mujeeb missed the reverse fixture of this game due to suspension but is now fired up to face them this time around.
“I see nothing but a win for us. A straight win.” He said.

Mujeeb spent the 2020 and the 2021 NNL season with El-Kanemi Warriors – netting more than ten goals in the process.

He also charged his teammates to play as one and get the maximum points on Sunday. He urged the fans to increase their tireless support for the Citizens.