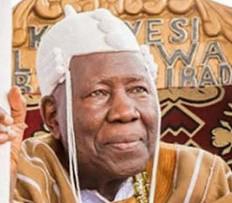 Reacting to the death of the royal father, Asiwaju Rotimi Ajanaku described the departure of Oba Saliu Akanmu Adetunji as a great loss to the entire people of Oyo State.

Ajanaku who is the Asiwaju Odo O’odua went further in his condolence letter signed and delivered to the family of the late monarch to describe Oba Adetunji as a decent, very reserved and principled monarch in Nigeria whose physical appearance commanded great respect.

“We have lost one of the greatest role models in Oduduwaland, a monarch whose judgements and approaches throughout his reign as Olubadan of Ibadanland were unbiased,” Ajanaku eulogized

“It is unexpected, not now at all, especially when we are yet to get over the death of Oba Jimoh Oladunni Oyewumi, Ajagungbade lll, the Soun of Ogbomosho whose death I described as a setback for Nigeria Unity. The late Soun’s administration carved classical respect for the stool of Soun of Ogbomosho.

“Losing of elders is becoming too many in Yorubaland and I pray God avert it, because we need advise and guidance of great leaders and elders to survive insecurity, unemployment economy instability and various hardship persisting or prevailing in Nigeria.

“Though Oba Adetunji’s death was unexpected and shocking at this very time of our great nation when wisdom of elders are needed, however, we should be happy his majesty lived a fulfilled life that is full of accomplishments.

“I pray God grant His Majesty’s family, Olori Rashidat Ololade Adetunji, Children, grandchildren and great grandchildren the fortitude to bear the irreparable loss. I equally sympathize with the Olubadan-in-council and the entire people of Ibadanland over the irreplaceable loss of their illustrious son and royal father,” Ajanaku sympathised.